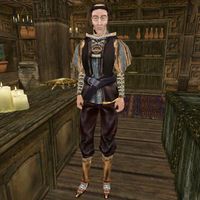 Mebestian Ence is a Breton trader who has a shop in Pelagiad. He buys and sells just about anything. He gains extra cash by facilitating the "export" of Dwemer artifacts.

During this quest, it is possible to ask Mebestian about the Dwemer artifacts which you by that point know he possesses. As may be expected (especially given the fact that there is a guard within earshot), however, he denies knowing anything about such contraband and scolds you for suggesting otherwise, regardless of his disposition towards you. And he is just as unwilling to disclose any information that he might possess concerning New-Shoes Bragor's imprisonment:

Should you decide to confront him with the Dwemer contraband that you need to steal from his shop in order to blackmail Shadbak and free Bragor, he will react infuriatedly and continue to act as though he himself is innocent:

From that point onward, he is even less enthusastic to speak about Bragor than he was from the very beginning: