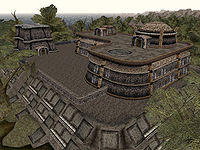 Hlormaren is a Dunmer stronghold that lies just west of Balmora.

It is one of the ancient strongholds of a brighter time for the Dunmer, located in the central Bitter Coast, west of Balmora. The stronghold has a total of five levels; the sewer, underground, bottom level, top-level, and rooftop. A point of interest is that Hlormaren is one of the few strongholds with a sewer system, which is directly connected to the sea west of the stronghold. This entrance is not of much use, however.

The strongholds seem interesting to the traveler but should be approached very carefully. They have largely been abandoned, but have since generally proved attractive to whatever group feels strong enough to hold them. At last report, Hlormaren has been taken over by slavers. The underground has a total of seven slaves, while the rooftop also has a room containing two slaves.

The agent Avon Ravel offers major training in Short Blade, Light Armor, and Sneak if properly calmed or snuck up on.

*For unknown reasons, Ushat has the feminine prefix "gra-" on his surname instead of the masculine "gro-".