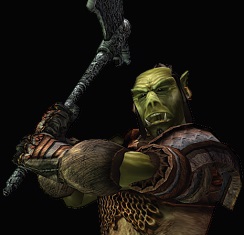 Like the Nords, Orcs are defensive combat characters, although they focus more on physical defense than magical. A starting Endurance of 50, plus a good Block bonus, means you may actually go out looking for scars. You're not totally helpless against magic, with about 50 willpower to start and 25% magicka resistance, but chances are you won't be devoting much of your time to increasing your willpower throughout the game. Pairing this high resistance they have as well as the natural Armorer bonus means you probably won't worry too much about long hikes, but you will need to improve your strength to compensate for the weight of your hammers. Berserk will turn you into a titan in case you find you started to feel immortal and got yourself in deep trouble, however, you may want a potion, scroll or enchantment to boost your agility as you may otherwise find it difficult to avoid being knocked down by your enemies. Your personality means you probably won't be well-liked, especially as a female character, so look forward to lots of straight-up hits from the Fighters Guild and Imperial Legion. It will be difficult to get along with anyone without plenty of training.

Orcs are the only race that get a bonus to Armorer and Block, so you can count on those being favorite skills for you. With axes being the only favored weapon skill, that's naturally a good place to start, but +5 isn't much of an incentive if you prefer another one-handed weapon style. The choice between Heavy and Medium Armor is even more equal, so go with whatever suits you more. Acrobatics will help you develop your strength, but it's up to you how much further you wish to develop your character. Armorer, Block, Axe, Heavy/Medium Armor, and perhaps Acrobatics are all that the Orcs really ask for, so you still have half your skills to assign as you would like to play.

Female Orcs are uniquely positioned to play as a Battlemage-type character, due to having increased Strength and Endurance without having compromised Intelligence. This comes with the tradeoff of slightly decreased Willpower, compared to the Male Orc, and an even further damaged Personality, having the lowest starting Personality in the game.