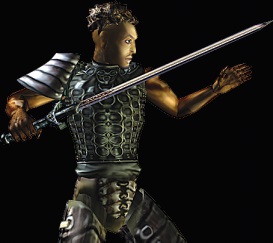 Redguards are certainly the most aggressive combat race you'll find in Morrowind. With 50 strength for males and +15 to Long Blade, you're in a position to do some serious damage right away. If you feel like abandoning defense altogether, you can use two-handed swords for maximum pain every time. As typically occurs with combat characters, part of it is practically designed for you. But there's still much room left to the individual. Ironically, the main focus of Redguards (big, powerful slashes of the sword) may end up just becoming a means to whatever else you want your character to be doing. Redguards are a great choice for someone who wants to dive into Morrowind and hack away.

Redguards have a power called Adrenaline Rush, which temporarily boosts health and other attributes. It can give you the upper hand in combat, but it should be used with caution. The 25 point boost lasts only for the duration of the Adrenaline Rush. After one minute is up, 25 health points are subtracted from your current health. If your health is at or below 25 points, you will die when Adrenaline Rush wears off. For this reason, it is always a good idea to carry a few Restore Health Potions with you if you are playing as a Redguard.