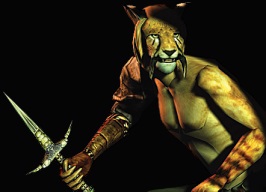 The best way to summarize the Khajiit is that it gets to go where it wants and take what it wants. The major increase in Acrobatics should make it significantly easier to navigate through elevated terrain, not to mention take a fall. The other bonuses they get are all minor but work together almost seamlessly. It should go without saying that this is the race of a thief or assassin.

In fact, the only noticeable weakness is what it shares with Argonians. The restriction of limited headgear and outright lack of shoes takes away a lot of things you can use.