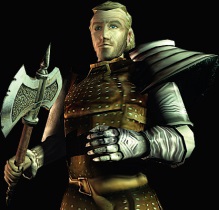 Bretons are the human descendants of the Aldmeri-Nedic Manmer of the Merethic Era and are now the inhabitants of the province of High Rock. They are united in culture and language, even though they are divided politically, for High Rock is a fractious region. Bretons make up the peasantry, soldiery, and magical elite of the feudal kingdoms that compete for power. Many are capable mages with innate resistance to magicka. They are known for a proficiency in abstract thinking and unique customs. Bretons appear, by and large, much like other pale-skinned humans. They are usually slight of build and not as muscular as Nords or Redguards. The great diversity in their appearance is to be expected from their politically fractured society, though their clothes, accents, customs and names are fairly uniform.

Bretons are good magical characters, more interested in using magic for their own personal use than hurting others. Their bonuses are entirely in the school of magic, which gives them 50% more Magicka (Fortify Maximum Magicka 0.5x INT). Choosing a magicka enhancing sign for a further Magicka boost can prove useful when relying on magic to deal with enemies.

The 50% Resist Magicka bonus can make many negative effects seem much more manageable. The significant boost towards 100% Resistance to Magicka can be helpful in regards to wearing the Boots of Blinding Speed without penalty or shrugging off annoying Bonewalker attacks. On the other hand, there are relatively few enemies that use extremely dangerous Magicka spells, and Resist Magicka does not affect fire, frost, or shock spells.

The Dragon Skin ability is useful early in the game and can be used to power through enemies that would otherwise be next to impossible to defeat. However, stronger shield spells with a comparable effect can be used with higher levels of Alteration. Regardless, it is a highly valuable addition to any character's arsenal.

Bretons have limited offensive skill bonuses, though they can make up the difference through natural skill-raising. In the early stages of the game, it may be beneficial to use a non-magical method of damage, while using magic to self-buff or debuff enemies. Conjuration can also be used for the purpose of summoning creatures to fight enemies.