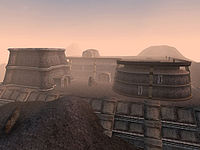 Andasreth is a stronghold in a pocket desert of the West Gash region.

It is one of the ancient strongholds from a brighter time for the Dunmer. It can be found north of Gnaar Mok, just over the mountains north of Khartag Point.

The strongholds seem interesting to the traveler, but should be approached very carefully. They have largely been abandoned, but have since generally proved attractive to whatever group feels strong enough to hold them. At last report, Andasreth has been taken over by bandits. Four dead Redoran guards, presumably killed by the bandits, can be found on the Lower Level of the stronghold.

Andasreth has a propylon chamber linking to Hlormaren and Berandas.

The Andasreth Propylon Index can be found on a shelf in the dome on top of Hlormaren. 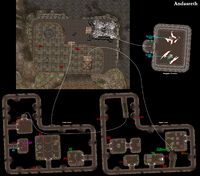