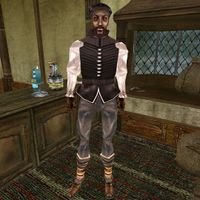 Irgola is a Redguard pawnbroker who owns a shop in Caldera where he sells a small variety of goods. Most notable is that he has the Hlormaren Propylon Index in his possession. If you don't want to pay for it, you can snag it from the windowsill behind him while he's not looking.

When asked about his name, Irgola will tell you, "It's just a nickname. Means 'master' in the goblin tongue. I wasted my youth in the Dragontail Mountains and earned a reputation for goblin-hunting."

He is one of the suspects for the theft of the Caldera Mining Contract.