Galom Daeus is a Dwemer ruin southwest of Uvirith's Grave, occupied by the Berne Vampire Clan.

It is the site of a Temple quest. The ruins are divided into two areas, the Entry and the Observatory.

This is the main entry area of the ruins. There are six vampires, and four cattle. There is low-level armor and weapons around and in chests, as well as a repair hammer. The book Antecedants of Dwemer Law, a pair of Daedric boots, some ebony throwing stars (in a chest), and a pair of glass boots (in another chest) are located within this area of the ruins.

The Observatory is the inner sanctum of the Berne clan. There are two steam centurions, four vampires and four cattle in this part of the ruins. There are more base armor and weapons, repair hammers, potions, and ingredients around. There is also a Daedric shield hidden away here, on the ledge ringing the inside of the observatory, as well as four books: Mysticism; Vampires of Vvardenfell, v II; Secrets of Dwemer Animunculi; and Galur Rithari's Papers. 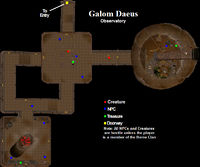