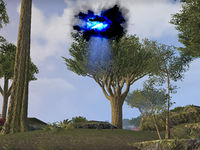 A Dark Fissure, with Banekin underneath

A Dark Fissure in Elder Scrolls Online is a small version of a Dark Anchor that appear at set locations in the world with a difficulty level intended for solo completion. Three enemies may spawn when you approach the fissure's location. If you defeat these three then two more enemies will spawn, one of them being a higher difficulty level. Defeating these two will reward you with a small amount of experience points. Typically you will also find a superior or epic item as loot from one of the enemies. During the Witches Festival, Dark Fissures can drop a Dremora Plunder Skull, Public & Sweeper.

Known locations of Dark Fissures can be found by searching for them on our ESO Map. They can only be found in the large alliance zones of the base game,[verification needed — Can they be found in Cyrodiil, Coldharbour, or starter zones like Betnikh?] and not in DLC zones or Craglorn.

Due to Dark Anchors and other Planemeld-related matters being related to zones that were present at launch, zones released afterwards have different PvE activities that share some similar features to Dark Fissures.

An Abyssal Pool. Note the water splashing up from beneath the Yaghra Strider

On the island of Summerset,

Abyssal Pools (smaller version of Abyssal Geysers) can be considered the counterpart of Dark Fissures and function in a similar manner. They often feature one or more strong yaghra and a number of yaghra larvae. 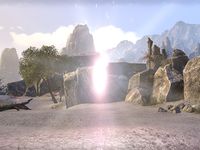 Rifts are glowing portals that appear at set locations in Lower Craglorn with a difficulty level intended for group completion. They can be walked up to and activated to summon a wave of enemies, varying by the east and west parts of the zone. 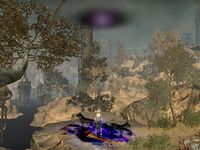 In the Radius of the Clockwork City,

various fissures leaking in from the Evergloam appear where daedra and other shadowy enemies spawn. They are different from the Daedric Incursion Sites encountered during the quest A Fine-Feathered Foe.

This Elder Scrolls Online-related article is a stub. You can help by expanding it.
Retrieved from "https://en.uesp.net/w/index.php?title=Online:Dark_Fissure&oldid=2234177"
Category:
Hidden categories: