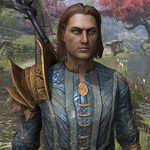 Martin Draconis is an Imperial male Magicka Sorcerer based on Martin Septim. Created soon after midnight on 30 March 2014, he could have been called Martin Septim since the name was available. However, his player decided she did not want to get any grief and so named him according to her fanfic. Go figure. This Martin is a Sorcerer Healer who wears a blue robe, and although he is capable of Daedric Summoning, the only summon he ever uses is a Storm Atronach - since Atronachs may be considered constructs rather than Daedra.

Martin's main talents are in Restoration Staff and Destruction Staff, although he can use any weapon or armor type available in ESO. He is a member of the Mages' Guild in good standing. He has completed every quest in Aldmeri Dominion and Ebonheart Pact lines, as well as Craglorn, the Imperial City and Wrothgar. He hasn't, however, completed the Daggerfall Covenant areas, mostly because his player got bored with running three characters through them at once.

Like his Oblivion namesake, Martin is kind, friendly, and can't stand to see people in distress. He loves knowledge and is often found with his nose in a book. His personality type is INFJ ("the Advocate"). 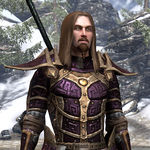 Bjornolfr Steel-Shaper is a Nord male Magicka Dragonknight. Created around 2 am on 30 March 2014, he was always intended to be a blacksmith. However due to the way that crafting styles work in ESO, he soon picked up Light and Medium Armor crafting and woodworking too. He knows all 9 traits in every craftable item, and can therefore create any crafted set in the game.

Bjorn (pronounced bee-orn) is named after the tragic Dragonborn character and modelled after his player's husband. He is a member of the Fighters' Guild in good standing. He has completed all Ebonheart Pact areas and most of the Daggerfall Covenant, along with Lower Craglorn and some of Wrothgar. Mostly now he crafts sets of armor and weapons for people, which suits his personality very well - he never wanted to be a hero, just a good blacksmith :) He is happy to spend his days gathering materials and crafting in peace and quiet. 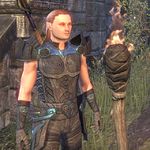 Alix de Feu is a Breton male Magicka Templar. He is Martin Septim's lover in my Oblivion fanfic, a Destruction Mage spellsword with a particular affinity for fire, and it was not difficult to create him in ESO in the Templar class. Alix's main talents are in Dawn's Wrath and Inferno Staffs, and he also uses Restoring Light and Restoration Staff to heal. Lately he has started equipping two swords, but only for the passive boost to his Spell Damage.

He is a member of the Mages' Guild in good standing. He has completed every quest in Daggerfall Covenant areas, and is working through the Aldmeri Dominion now. He has reached v14 despite having done nothing in Craglorn, the Imperial City or Wrothgar yet. Alix is resourceful, extremely outgoing, has a huge number of friends, and thinks nothing of talking back to Daedric Princes. His personality type is ENFP ("the Campaigner").

There is a version of Alix on the European Server for ESO, but that character is only around level 10. Sadly the European server is deserted at the times I play, which is why I run the North American branch of the UESP Guild despite living in the UK :) 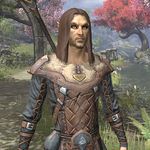 Basically, I thought Count Verandis was cute and wanted to have my own version of him to play with. I gave him a different name since I didn't realise you were "allowed" to name your characters after NPCs. You will notice that my Verandis has amber eyes instead of green - this is because I created him after the point in the storyline where Count Verandis drops the Illusion magic which hides his vampirism, so I had to guess what colour his eyes were. He belongs to the AD rather than DC since I didn't think I would ever want to play Glenumbra again, and it had been a very long time since I'd gone through the Auridon quests.

Verandis specialises in Siphoning, Destruction Staff, and Restoration Staff. He doesn't actually have vampirism yet since I ran out of enthusiasm to play him, right around the time that Alix got to Auridon. He is a member of the Mages' Guild but only for the passives. He will remain unmarried because Count Verandis belongs to Gwendis and/or Adusa-daro. 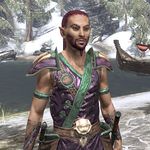 Gethin Oakrun is a Bosmer male Stamina Nightblade. He was created when the Justice System was added to ESO, as all of my previously existing characters were honest and law-abiding. I wanted to have at least one character who was able to steal. Gethin is a Bosmer from Valenwood who has been brought up keeping the Green Pact and Rite of Theft.

Gethin left Valenwood for the foreign lands of the Ebonheart Pact due to his fellow wood elves' dislike of shapeshifting. Bosmer who become werewolves are called Oathbreakers and are liable to be buried alive. As a follower of Hircine who hopes one day to gain Lycanthropy, Gethin thought he would be safer in the lands of the Nords, Dunmer, and Argonians. He does not reject the Green Pact entirely but is willing to eat plants grown outside Valenwood. He maintains his belief in the Rite of Theft even more strongly while living with his EP "enemies".

As my only Stamina character, Gethin specialises in Dual Wield and Bow. (Let it be known that this player considers the Bow skill line in ESO to be greatly inferior to Archery in Skyrim.) He also uses Assassination and Shadow. 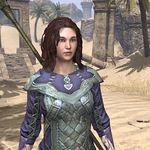 Arzhela Petit is a Breton female Magicka Dragonknight. Arzhela is the "me" character that I always create in an Elder Scrolls game, although she was only created in June 2015 (i.e. over a year after starting ESO) rather than my very first character. She's a Breton because I am canonically a Breton - even though I already have Alix as a Breton in ESO! She's a Dragonknight because I wanted to explore how to make the perfect Magicka DK Healer, given that Bjorn has "too many" skill points invested in crafting to have every possible DK skill.

I am somewhere between quite annoyed and extremely amused that I accidentally named her after an existing character in ESO. I was going out of my way to avoid existing Breton names while keeping to the same theme. But I missed the existence of the list of all Breton females in the game (and indeed, can't find it on the wiki now). So when I saw "Arzhela" on a list of names from real-life Brittany and saw that it meant "Bear Princess", it was so obviously The Right Name that I chose it.

Like most of my characters, Arzhela specialises in Inferno Staff and Restoration Staff, along with Ardent Flame and Igneous Shield.