Online:Hall of the Lunar Champion 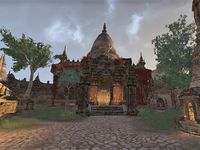 Hall of the Lunar Champion

The Hall of the Lunar Champion is a large player house in Rimmen.

Upon completing the Two Queens, the Vestige receives the following mail:

Five-Clawed Warrior,
In recognition of your service to Northern Elsweyr and our rightful Queen Khamira, Moon-Bishop Sebizah hereby grants you stewardship over the Hall of the Lunar Champion.

Our ancestors dedicated this temple to the legendary hero, Khunzar-ri. Alas, the raking claws of time have reduced it to a shell of its former glory. Even so, some relics remain intact. In ancient times, four enchanted tablets allowed adventurers to walk in the footsteps of Khunzar-ri. Three are lost to history but one remains.

Place this tablet on the Jonelight Altar and take the first step to restoring this hall to its former glory.

It contains three unlockable sections that require completion of Season of the Dragon content. The manor and the Behold the Lunar Champion tablet are both acquired as quest rewards from Two Queens. Tablets are placed on the manor's altars to allow access to the other sections of the home.

The Behold Khunzar-ri's Betrayal tablet is obtained from completing The Heir of Anequina and can be placed on the altar of Betrayal, opening a portal to an overlook of the Halls of Colossus where furnishings can be placed.

The Behold Khunzar-ri's Guile tablet is obtained as a reward for completing the Scalebreaker Scout achievement. It can be placed on the Altar of Guile, and opens a portal to a secluded exterior location within Moongrave Fane for additional furnishing.

The Behold Khunzar-ri's Ambition tablet is obtained as a reward for completing the Return of the Dragonguard achievement. It can be placed on the Altar of Ambition, opening a portal to the Lion's Cradle, a raised Khajiiti house overlooking Pridehome, for additional outdoor and indoor furnishing.

The "unfurnished" house has 22 total furnishings.

This Elder Scrolls Online-related article is a stub. You can help by expanding it.
Retrieved from "https://en.uesp.net/w/index.php?title=Online:Hall_of_the_Lunar_Champion&oldid=2606461"
Categories:
Hidden categories: