The UESPWiki – Your source for The Elder Scrolls since 1995
< Elder Scrolls Online: Places: Stormhaven / Player Houses
Jump to: navigation, search 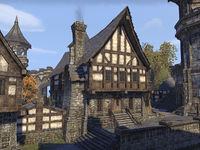 Gardner House is a large player house in Wayrest. The home has three entrances on the east, south, and west. The eastern entrance brings you into a small courtyard on the north side of the house which possesses a stable at the western end. The house has three spacious floors, a fireplace on the middle floor where all three entrances are and a large open basement. The house is conveniently located near the Wayrest Treasury to the south and the city's writ drop-off location, which includes Rolis Hlaalu, for dropping off Master Writs. 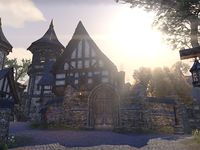 Entrance to the courtyard

The "unfurnished" house has 17 total furnishings.

The "furnished" house has 176 total furnishings. 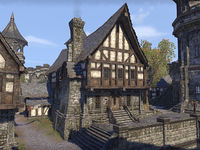 There are several achievements associated with this house: