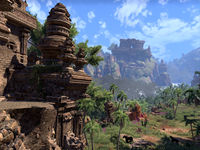 Moongrave Fane is a group dungeon in the ancient ruins of a forgotten Khajiiti faith. It is part of the Scalebreaker dungeon pack DLC, along with the Lair of Maarselok. Deep within the ancient ruins, a former member of the Dragonguard and his fellow vampires of the Hollowfang Clan have felled and captured a Dragon. However, they wish to do more than simply destroy the humbled beast, as the clan prepares a ritual to drain the Dragon of its blood and gain its terrible power! 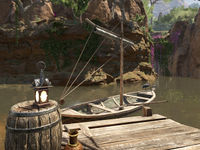 A note titled Enough Kitten Play! is located just before the area with the first sliding stone puzzle, beside a wall in the southeast corner. The Risen Ruins guards the door at the northernmost end of the path.

The Fane of Waning Moons

This area lies beyond the Risen Ruins. Dro'zakar is the boss of this section.

Kujo Kethba lies at the end of the path, and guards the door leading to Moonlight's Mausoleum.

Sahrotnax is being held prisoner at the crash site in the deepest recesses of the mausoleum. You will fight Nisaazda and Grundwulf on the platform overlooking him.

This Elder Scrolls Online-related article is a stub. You can help by expanding it.
Retrieved from "https://en.uesp.net/w/index.php?title=Online:Moongrave_Fane&oldid=2641722"
Categories:
Hidden categories: