The UESPWiki – Your source for The Elder Scrolls since 1995
< Lore: Races(Redirected from Lore:Wood Orc)
Jump to: navigation, search 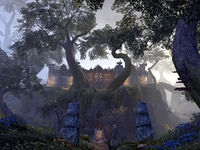 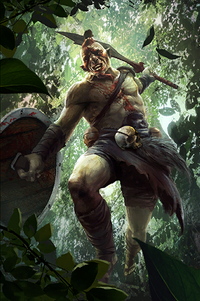 The Wood Orcs are Orcs that live in the province of Valenwood, rather than the ridged mountains across the north. Much like their cousins, the Wood Orcs value strength and honor, but like their neighbors, the Bosmer, they also strive to improve their agility and mobility in the tricky environment. Beyond their geographical differences and personal goals, the Wood Orcs are Orcs through and through, stubborn, blunt, and brutish.[1]They are known to worship Malacath,[2] the Daedric Prince of Oaths, or in this case, Mauloch, the God of Curses.[3][4] 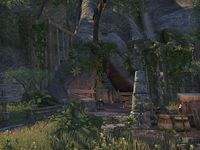 A Wood Orcish Mine in Greenshade

As mentioned before, the Wood Orcs value agility and mobility, they are expert tree-climbers and keen trackers like the Wood Elves, however, unlike their neighbors, the Wood Orcs do not adhere to the Green Pact and are free to exploit the environment, much to the dismay of the Bosmer.[1] However, this brings a lot of business opportunities for these races, for example, the Wood Orcs main source of trade was from mining coal and kindlepitch, and selling to the Bosmer who cannot exploit the landscape in the same way, but still need fuel for their fires.[5] Not to mention, the Wood Orcs are just as good at smithing than their northern cousins, so most, if not all of the Bosmer's metal tools and weapons comes from the Wood Orcs.[6] It is well-documented that Wood Orcish shaman collect dreams and puts up bone dream-catchers throughout their camp. What they do with these dreams is unknown, as it is a closely-guarded secret.[7]

If a Wood Orc was placed in an Orsinium militia, they would be considered the light skirmishers than the bulky berserker,[1] but are still Orcs nonetheless. They pride themselves on their strengths, their forefathers, and gods, they recognize defeat in battle but are never bested themselves. But those virtues had failed them when the Ayleids conquered the town of Abamath. The Wood Orcs look back at this event and turned it into a rallying cry, painting their faces like those that fought for Abamath, hoping to wash the shame of their ancestors and showcase their newfound ferocity.[2] The Wood Orcs live in Valenwood with the Wood Elves, as well as other beastfolk, like the Centaurs and the Imga. They can live amongst each other ranging between places like the Bloodtoil Valley and even the capital, Falinesti.[8] 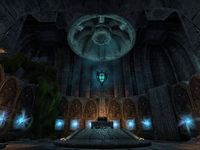 The Wood Orcs are an off-branch sect of the Orcs, who commonly live in the Dragontail Mountains and the Wrothgarian Mountains. These orcs reportedly lived in Valenwood sometime before the Wood Elves landed in Valenwood, or even when the Aldmer had even arrived from the lost continent, Aldmeris.[9] There have been countless times where the Wood Orcs have fought with the Wood Elves. At one point, both the Orsinium Orcs and the Wood Orcs held peace between each other, that was until a falling out led to their continued separation.[10] Following the Alessian Slave Rebellion in 1E 243, the Ayleids were forced out of Cyrodiil and some of the surviving tribes moved south into Valenwood, displacing some Wood Orcs. The most infamous example was the taking of Abamath, which is still remembered today in Wood Orcish culture. The Orcs painted themselves in the blood of Mauloch and relied on their shaman's ritual magic to protect them from the invaders, but it was all in vain and those that survived were either driven out of the existing cave system,[11] or were turned into slaves.[12] The event has since been recited by modern-day Wood Orcs and used as a rallying cry.[2] 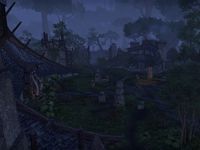 Throughout history, the Wood Orcs have encountered and even negotiated with the other races of Tamriel, primarily the Imperials of the Second Empire, who expanded their domain into Valenwood in 1E 2714.[13] The territorial tribes were known to raid various Imperial Garrisons such as Reman's Bluff, which resulted in their downfalls. However, these victories over the Empire led to many new settlements built from their remains. The ruins of Reman's Bluff later became the home of the Barkbite Clan of Wood Orcs, who were not related to the clan-hunters that led to the fort's destruction.[14] And most notably, the remains of the garrison later built a fort-town on the Long Coast that later became the major city-state of Valenwood, Southpoint.[15] In times, the Wood Orcs had even worked with the Imperials, most infamously was what is now, Goldfolly, a failed mining-town that became an Orcish outpost and finally a ghost-town.[16] The Darkfern Clan had worked with the Canonreeve, Oraneth in an operation to uproot the Aldmeri Dominion from their capital-city, Elden Root, by bringing an army of darkness from the pocket realm, Nightflame.[17]

In 2E 582, the Drublog Clan joined forces with the Hound, Ulthorn and waged war against the Aldmeri Dominion across Malabal Tor following the ascension of Indaenir to the role of The Silvenar. The clan besieged the town of Velyn Harbor with a band of Redguard mercenaries. The invaders were swiftly displaced by an agent of the Dominion and the Fists of Thalmor.[18][19] The attack had prompted an investigation of the Drublog's stronghold, Dra'bul that led to the death of Chieftain Agrakh and the Drublog's change in allegiance to the Green Lady, Gwaering.[20] On their way to Silvenar, the Silvenar, and his entourage was captured by the Drublog of Jathsogur and kept prisoners on the hilltop. The compound was raided and the Silvenar was secured.[21]

Barkbite Clan
The Barkbite Clan lives in the Tarlain Heights, building their community from the ruins of Reman's Bluff.
Darkfern Clan
The Darkfern Clan that hail from Grahtwood.
Drublog Clan
The Drublog Clan is a prominent faction that lives across Malabal Tor and maintains large-scale strongholds like Dra'bul and Jathsogur.
Lhurgash Clan
The Lhurgash Clan is predominantly found across Greenshade, in the eastern region around the city of Marbruk and the spring site of Falinesti.