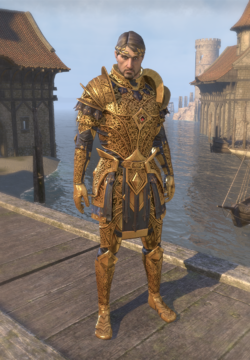 Silvanus the Gilded, Duke of the Niben

Duke Silvanus Argenteus, better known as Silvanus the Gilded, was an Imperial merchant lord and gifted alchemist who ruled over the Topal Sea region during the Interregnum. He achieved power peacefully through trade, but was nonetheless an accomplished soldier and aristocrat. The Duke is noted for remaining approachable and well-liked even as he rose through the ranks of both the military and nobility of Cyrodiil.

Life began for Silvanus in the beautiful southern Cyrodilic town of Leyawiin, found within the warm and lush region of Blackwood where the province borders Black Marsh and Elsweyr. His earliest years were marked by endless hours at the library, daily worship sessions at the chapel, and fishing in the Niben alongside the local Khajiit and Argonian children. This was a carefree and comfortable life; nonetheless, he was raised with the virtues of hard work, gratitude, and reverence. Much of this can be attributed to the humble origins of his parents, who were themselves Nibenese common folk.

Sometime before Silvanus' birth, his father became an agent of the Gold Coast Trading Company. Charged with traveling the continent to buy and sell goods of all kinds on the company's behalf, his father's work as a trader elevated the family's wealth and social status considerably. From a young age he became determined to emulate the merchant lifestyle for himself, and this decision would set the course for everything that followed in his life. To that end, much of his teenage years were spent as a courier running goods between his home and Bravil via the Green Road. When he wasn't buried in his studies or delivering parcels, he could be found aboard his fishing vessel on the waters of nearby Topal Bay or stalking its shoreline for clams -- a hobby that would come to have great influence over his future.

As he came unto adulthood, his thirst for wisdom would eventually prompt him to seek out those who protect Tamriel's greatest secrets: the Order of the Ancestor Moth. Even as a teenager, he regularly made pilgrimages to their temple in the north. He did not know it then, but he would become their greatest protector and benefactor in the unstable political climate that loomed on the horizon.

When it comes to life in Cyrodiil, connections are important. On his eighteenth birthday, Silvanus made the decision to enlist with the Imperial military and immediately leveraged his father's status to his advantage: he would be assigned to the gleaming white-gold walls of the Imperial City itself. As a member of the Capital Defense Garrison he did not belong to any any numbered Legion, instead reporting directly to the Palace Guard. Often referred to in jest as the "Rumare Navy" by Legionaries outside the unit, the garrison in fact did the very important job of defending the city and its Emperor by patrolling the waterways and numerous caves of the City Isle. Before his days of service were over, Silvanus would be placed in command of this unit, sending his orders from an office in the Waterfront Lighthouse.

Despite the success he was enjoying as a military man, Silvanus could not help but feel that he was destined for greater adventure and excitement, and so he retires from service having achieved the rank of Legate. Thanks to his proven record as a servant of the crown, he finds little difficulty in obtaining new employment with the Imperial Geographical Society as a cartographer. The assignments that followed would take him all over the Empire: the city of Falkreath, the islands of Sheogorad, the Tenmar Forest, and even back to the sewers of the Imperial City. Regardless of where he ended up, he enjoyed his work tremendously. In 2E573, his career as a mapmaker reaches its pinnacle when he is asked to contribute in the very first Emperor's Guide to Tamriel.

Throughout these travels, Silvanus kept his bartering skills sharp by striking deals with local traders and collectors. This began as a way of obtaining mementos from his time in each place, but without intention he became quite adept at accumulating exotic items. Before he could consider another change in his career however, world-changing events would unfold.

With unrest now brewing across the continent, Silvanus recognized that it was the perfect time to establish himself as a trader in his own right. He would have preferred to return home, but the region of Blackwood became cut off from travel as conflict commenced. Thus he was forced to make a name for himself elsewhere: the old Imperial town of Arenthia, conveniently located where Cyrodiil, Valenwood, and Elsweyr share their borders.

An early success came in the form of clam digging on the island of Summerset, a trade to which he was introduced by an enterprising young Khajiit named Míxíe. Though he had hunted for clams on the bay in his younger years, this was only for food; the variety he found on the island homeland of the Altmer was much larger and had highly desirable alchemical properties. As a result, he developed a fondness for pearls that is reflected in the decor of his homes even today.

Building upon his achievements as a private trader, he expanded his reach through the establishment of storefronts and other businesses: an alchemy shop, a nirncrux mine, a rare book store, and a clam harvesting operation to name just a few. Around the same time, he began taking on wealthy clients who wished to utilize his vaults in Arenthia for the protection of their valuable items -- a service that became popular with Cyrodilic nobility when times became uncertain.

All of this prosperity was rewarding for a man who dreamed of being a traveling merchant, but Silvanus still found himself longing for home. Without an army of his own to retake Blackwood, returning to Leyawiin at the time would have been impossible. Rather than initiate a struggle he could never hope to win, he instead took a vast sum from his holdings and persuaded the Aldmeri Dominion to sell him the strategically important but undeveloped Topal Island. The fishing village of Driftwood, with its pristine beaches and crystal clear waters, would become his seat of power in the region. Despite being forced to sign a non-interference pact, the purchase had put him close to home and back in familiar waters.

When the intensity of conflict in southern Cyrodiil softened for a time and trade re-opened with Blackwood, Silvanus ingratiates himself with the royal court of Leyawiin. Once more bartering to find advantage, his modest fleet is offered as a shield against Dominion aggression in return for control of the Niben River. Without ceremony and without the need for celebration, he declares himself Duke of the Niben, his territory described as: "The River Niben and both its banks, from Bravil to the Isle of Topal Bay."

This tropical paradise ruled over by Silvanus is straight out of a fairy tale. Situated in the Topal Bay south of Cyrodiil and between Elsweyr and Black Marsh, it is sparsely inhabited save for those in the employ of the Duke. Due to its location on the bay, it is the ideal environment for growing moon-sugar cane as well as the regular harvesting of clams. At the main landing, you will find a tribute to Topal the Pilot, the Aldmeri explorer who charted the waterways of Tamriel and for whom the island is named.

While its current owner may claim it for Cyrodiil, the cat-folk of Elsweyr and the lizard people of Black Marsh have both, at times, called this island home. Evidence of this can be found all over in the form of ruined stone architecture from the two cultures, some of which has been deliberately preserved or even restored by Silvanus. Further, the flora and fauna of both their homelands can be observed here.

Extending beyond the practice of alchemy, Silvanus' love for plants makes itself known in the kitchen as well as the garden. Though he rarely has time to personally tend the plants he keeps all over Tamriel, he sees to it that his staff follow strict guidelines in fostering some of the rare and vulnerable flora in his care. Many of the plants to which he dedicates resources are in danger of being wiped out through war in Cyrodiil, and so he harbors them such that they might one day flourish again. Unique and unusually beautiful Cyrodilic flowers dot his many properties, but he also works to preserve vegetables and other important consumables which are a boon to every meal served.