The UESPWiki – Your source for The Elder Scrolls since 1995
< Skyrim: Skills: Enchanting / Magical Effects
Jump to: navigation, search

This page documents the Magical Effects that can be used for Enchanting items.

Enchantment effects can only be put on items that are equipped to certain locations.

Base magnitude is the number shown when you hover over an enchantment without selecting it, if you have no perks. It is equivalent to the magnitude with a Grand soul, 0 skill, and no perks. Base uses is defined the same way but cannot be seen directly without the use of the console.

The net magnitude of the effect follows this formula, rounded down:

if you have Unofficial Patch installed or

if you do not have Unofficial Patch installed.

Soul multiplier is as follows:

Maximum possible natural (without potions) multiplier with 100 Enchanting, 5 levels in Enchanter, appropriate +25% perk and Grand soul is 3.125x. With potions (without exploiting fortify restoration effect) the maximum is 4.21875x.

For weapons, you can select the magnitude of the effect up to a maximum. The maximum magnitude is similar to apparel, but generally not affected by the soul used. However, if the soul is so small that the Number of Uses can not reach 1, then the maximum magnitude will be adjusted to make sure the weapon has 1 use:

Where skill multiplier is the same as for apparel, including the difference when installing Unofficial Patch. Note that multiple perk modifiers continue to add up - for example, the Chaos effect can incorporate up to 3 specific Enchanting perk modifiers and 3 elemental Destruction perk modifiers.

The number of uses does depend on the soul used, but not on perks (assuming maximum magnitude is used).

Note: base enchantment cost must be calculated according to the formula listed here when the enchantment is set to "Auto-Calculate".

To give you a rough idea of how this scales, removing the flooring from the maximum magnitude calculation allows the terms to be rearranged:

The charges per use are approximately a constant set by the enchantment, multiplied by a value set by skill, then modified upwards by magnitude raised to 1.1 and downwards by other modifiers raised to 1.1; those first two are:

As net uses goes up as charges per use go down, this effectively gives you a net use multiplier based on skill of:

This has a value of 1.38 at skill level 15, and a value of 4.375 at skill level 100. Again, this is approximate, as the flooring operations that occur when setting the maximum magnitude introduce important rounding errors later when determining actual net uses. At skill level 200, Charges Per Use is 0 and Net Uses is infinity, and beyond that, Charges Per Use ceases to be a real number, which is why Fortify Enchanting Potions fortify enchantments directly, rather than adding to skill - it is fundamental to how enchanting works that the skill number used in the above arithmetic never be above 200, and as just explained, even equaling 200 is problematic. The highest Enchanting skill reachable in the game, without mods, is 110, using Ahzidal's GeniusDB, which has a Net Use Skill Multiplier of 5.21.

Soul charge capacities are as follows:

If the weapon has two effects, the charges per use are added together, resulting in fewer uses.

A graph of the net use multiplier by Enchanting skill level: 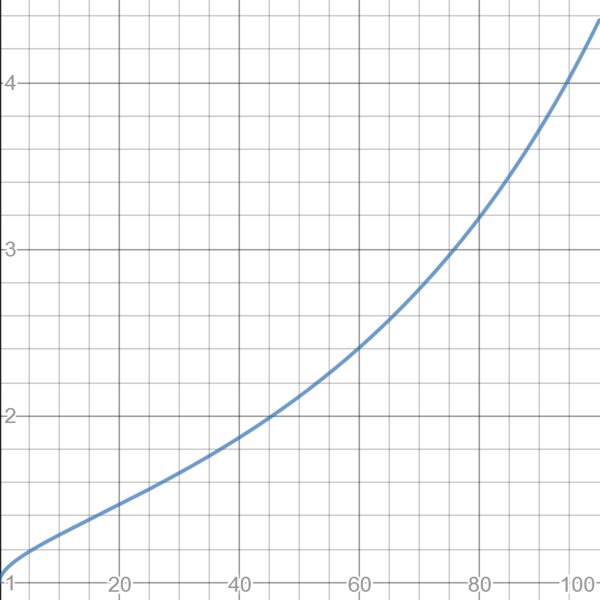