The UESPWiki – Your source for The Elder Scrolls since 1995
< Elder Scrolls Online: Quests: Prologue Quests / Grahtwood
Jump to: navigation, search

Imperial battlemage and former Grand Chancellor of the Empire, Abnur Tharn, requested my assistance with an important matter that could lead to the end of the Three Banners War. 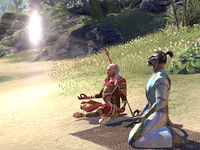 Standing with him is Tharayya, who (even if you have not completed the related group dungeons) will hand over the two halves of the Wrathstone to him. Tharn will tell you that he has discovered an opportunity that has the potential to end the Three Banners War within the Wrathstone, a mysterious ancient tablet that forms a map that leads to a weapon. Tharn claims that with this weapon, he can end the Three Banners War and bring peace to the Empire.

Before the map can be used, three triangulants, which bear what are essentially coordinates that complement the map held on the Wrathstone, need to be located. The key to finding them is within a Khajiiti myth, and a loremaster named Dagaril-dro knows the location of storytellers familiar with the legend. However, he must be given a gift first, as it is only polite to give someone a gift before asking them about potentially world-threatening secrets. You will need to collect four Dusk Mushrooms from a delve which is alliance-dependent:

Hightide Hollow. Abnur Tharn will not accompany you to find the mushrooms, as he reveals that he is being stalked. Once you've filled the Sack of Dusk Mushrooms, you must find Dagaril-do along the coastline of the zone.

Dagaril-do is located on the north coast of Auridon, a short distance north-east of Beacon Falls.

Dagaril-do is located at the western tip of an island in Daggerfall's southern bay, west of the Daggerfall Southern Docks.

Dagaril-do is located near the Daen Seeth Dolmen. He is sitting in an Argonian-style tent below the cliff where the dolmen is, facing Ebonheart. He's located on the small beach where the lava is pouring down from Ash Mountain into the sea.

Once you've given your gift of mushrooms to Dagaril-do, he will tell you the storytellers can be found at Redfur Trading Post, Baandari Trading Post, and Rawl'kha. Don't worry if you haven't discovered these locations yet, as Abnur Tharn will open portals to them when needed. 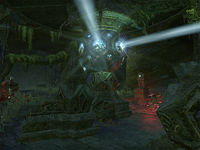 Your first stop is Redfur Trading Post where you must find Azargo Long-Tale and listen to his story. When you arrive, Long-Tale will be telling the end of his story. When he's done, you must speak to Abnur Tharn, though you have the option of asking Azargo Long-Tale more about the story, which you missed most of. Tharn determines that the story talks about an Ayleid ruin called Wormroot Depths. He believes that you will find what you're looking for in there. You will need to make your through Wormroot Depths to the hidden Khajiiti room located near the end of the delve: The New-Moons Chamber.

In order to reveal a chest containing the triangulant, you must solve the puzzle. There are statues with four different icons on them - full moon, waning moon, new moon, and waxing moon - and nearby is a tablet with the answer to which statues to activate. This process is the same for each triangulant you will find. For now, focus on the puzzle.

The tablet in this chamber details the story of Khunzar-ri and the Full Moons:

When Jone and Jode, in their fullness, face the empty sky, Khunzar-ri will see the path to knowledge.
These are the words, and the words are true.

The riddle obviously has something to do with the tablets. This one mentions the full moons and an empty sky. Activate the Moons Guardian that bears the Full Moons and the New Moons on its panel. Once the puzzle is solved, loot the Ancient Khajiiti Chest and enter the portal that Tharn has opened to the Baandari Trading Post.

Once you're there, find Mizbina, listen to her as she finishes her story, and talk to Abnur Tharn. Tharn determines that the next piece of the puzzle lies within Black Vine Ruins. Within the ruins' chamber lies another light puzzle. 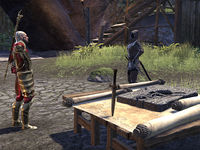 The Mane's agent confronts the Chancellor.

Here, there lies a plaque bearing the anecdote of Khunzar-ri and the Dark Moons:

Sometimes knowledge can only be found in the dark. The fading moon gives way to the empty sky.

The solution to Black Vine Ruins's puzzle is to activate the Moons Guardians that bear the new moons and the waxing crescent moons. Take the triangulant from the Ancient Khajiiti Chest, and Tharn will open a portal to your next destination.

Take the portal to Rawl'kha and listen to what remains of Satarri's part of Khunzar-ri's legend. Tharn will deduce that the next piece of the puzzle lies within Jode's Light, so make your way over to the ruins. When you arrive, a mysterious Khajiit named Khamira is waiting outside the entrance for you.

Within the Full-Moons Chamber lies yet another plaque, this one far more weathered than the last two: Khunzar-ri and - - Moons.

The text upon this plaque is weathered and obscured, so it's going to be a smidge harder to figure this one out. You may have noticed that each phase of the moon is has two Moons Guardian panels bearing their image; in other words, there's two of each moon phases depicted in the room. Given the name of the chamber, "Full-Moons", and the fact that the plaque mentions "mirroring", you should deduce that the solution to the prism puzzle is to activate the two Moons Guardian panels that have an image of the full moons on them.

Doing this solves the puzzle, and the final chest is revealed. Take the triangulant and head through the portal to Abnur Tharn's camp, which lies north of Cormount, Grahtwood. Here, Khamira will finally confront Abnur Tharn.