Abnur Tharn seeks an audience with me away from the Harborage. I should see what he wants.

Upon completion of the last quest, you should get a quest telling you to go to the Mages Guild in your alliance's first major city (Vulkhel Guard, Daggerfall or Davon's Watch). Inside the guildhall, the quest will update; now you need to talk to Abnur Tharn. Tharn is dressed like a mage in blue and white robes.

"I can't be strutting around the city wearing my Imperial regalia, can I? Your concern about my fashion sense is touching, but irrelevant."—Abnur Tharn

Tharn questions why you trust Varen and tells you about Varen's plan to re-form the Five Companions. Sai Sahan is special, not only because he is a missing companion, but because he knows the location of the Amulet of Kings.

Depending on your faction, Tharn will tell you that Mannimarco keeps his important documents in Wormroot Depths (Aldmeri), Norvulk Ruins (Daggerfall) or Knife Ear Grotto (Ebonheart).

You agree to meet him inside the secret Daedric lair. You can choose to ask him about himself or what he will do now. He is from a family of advisors and politicians. His daughter, Clivia, the Empress Regent, along with his nephew, Javad, are devout servants of Molag Bal. He laments the loss of his family's name from the history books due to his defection, but he says he remains focused on ensuring the survival of the Empire. 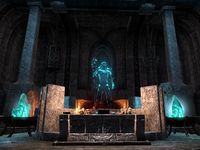 "I will find the amulet, one way or another."

Inside the lair, you need to find and use three Speaking Stones. These show a brief projection of Sai Sahan and two of Mannimarco.

"The Redguard's iron will cannot be overcome with standard interrogation techniques. Physical tortures appear to be useless. I have therefore instructed the Daedra to move Sai Sahan into the Halls of Torment. The Duchess will be most pleased to have a new…guest."—Mannimarco

Talk to Abnur Tharn. The Halls of Torment is Coldharbour's most nefarious prison, whose prisoners face apparitions of things they fear the most. He will need to do some research before you can enter the Halls, so he asks you to go to the Harborage and tell Varen what you found.

Talk to Varen in the Harborage. He will help Tharn look for a safe way to break Sai Sahan out of the Halls of Torment. He gives you a reward.

This Elder Scrolls Online-related article is a stub. You can help by expanding it.
Retrieved from "https://en.uesp.net/w/index.php?title=Online:The_Tharn_Speaks&oldid=2646301"
Categories:
Hidden categories: