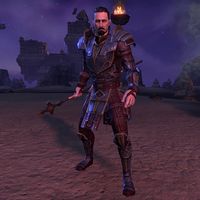 Javad Tharn is an Imperial member of House Tharn, and a nephew of Abnur Tharn. He has invaded Reaper's March with an army of Colovians and with the support of the Stonefire Cult and the Daedric minions of Molag Bal. Although his invasion appears as a simple land grab, Javad seeks to align himself with the dro-m'Athra and plunge the Khajiit into darkness, thus destroying the Aldmeri Dominion.

Although his actions can be seen all across Reaper's March, he is only encountered in Dune at the end of the questline. After opening a Dark Anchor during the quest The Fires of Dune, he will walk the Two Moons Path and will make his way to the shadowy demiplane known as the Den of Lorkhaj. You will have to kill him to free either Shazah or Khali from the influence of the Dark Mane and allow the Lunar Champion to become Mane.

Javad Tharn: "Your powers wane, fool. Keep control of this shell! You will need it to destroy the Lunar Champions."
Javad Tharn: "Now an intruder has breached the temple. Destroy them. Do not fail me!"
Javad Tharn: "Worthless animal. Burn in the fires of Oblivion."

Cleanse the Shrine of Jode and you'll hear:

Javad Tharn : "You cannot stop the inevitable. The city is ours. Soon I will hold your "Mane" in my hand, and my Dark Mane will walk the Path. The soul of the Khajiit will be lost to darkness!"

Enter the Shrine of Lorkhaj and a projection of Javad Tharn will be standing in front of the summoned anchor. He will also put the Lunar Champion in magical bonds:

Javad Tharn : "You are too late! The city is ours! Your faith cannot overcome the Master's Mace!"

Destroy the anchor and he'll threaten:

Javad Tharn : "I'll see you on the Two Moons Path."

Shazah: "The Den of Lorkhaj... it's even more beautiful and horrible than I could have imagined. Come, Hallowed."
Javad Tharn: "Ahh, you remember her?"
Khali: "Shazah... I've missed you. You left me alone in the dark."
Shazah: "Khali? Is that you? You're alive? You're safe?"
Khali: "Of course I'm alive. Safe and sound..."
Javad Tharn: "Your sister is safe. Her soul has been purified by darkness. Come, join her. Come join your sister."
Shazah: "Let her go! Show yourself, you bastard! I'll take your face off with my claws."
Javad Tharn: "Oh, you want her free? Here is your sister, free. Your sister, my new Dark Mane!"
Javad Tharn: "It seems I have the wrong sister... weakling child!"
Javad Tharn: "Dark Mane! Attend me! May the shadows of your dead god imbue you with strength!"

If you have completed the Reaper's March questline, Javad will be in Heart's Grief, immobilized in an aura of purple magic.

"Ahh … it's the Mane's pet. Are you here to let me out? I can't wait to dig my fingers into your very soul."
You're not making a convincing argument.
"I refuse … refuse to grovel and wet myself for your amusement. I served the Master, taught his lessons, reveled in his power. I knew what awaited me if I failed. And I'd do it all again if I could!"

After speaking to him, Abnur Tharn will comment, "It's my small-minded nephew, Javad. The lad was petty and cruel for the enjoyment of it. I always suspected he'd meet an untimely end. Leave him to his fate. It's kinder than he deserves."

If you choose to release Javad, he will say:

Javad Tharn: "Thank you, Uncle! You won't regret this!"

He then dissolves into a puddle of green slime.

This Elder Scrolls Online-related article is a stub. You can help by expanding it.
Retrieved from "https://en.uesp.net/w/index.php?title=Online:Javad_Tharn&oldid=2224584"
Categories:
Hidden categories: