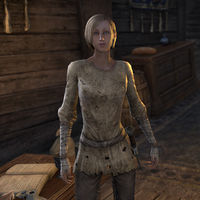 Nicolene is a Breton and member of Captain Kaleen's crew. She was invited to join them after Kaleen caught her pickpocketing her. Nicolene initially can be found tidying up the captain's quarters on The Spearhead in Port Hunding, and later will participate in several quests on Stros M'Kai and Betnikh. She shows an almost obsessive devotion to her captain and upon reading her private diary expresses great admiration for her. She inquires if Captain Kaleen is married, and expresses a desire to acquire clothing that Kaleen would like.

Nicolene also has two brothers fighting the Dominion around the Daggerfall area. Eventually, Nicolene will be promoted to First Mate of The Spearhead.

If you finished any of the Spearhead's Crew quests, Nicolene will come running to you and you'll hear:

Speak to her and she'll say:

"Ha! I didn't think I'd ever find you. You move around."
Can I help you?
"I'm Nicolene! I work for Captain Kaleen. She sent me to find you, see if you'd had any luck recruiting for our heist. Looks like you're already making new friends."
You could say that.
"Then listen, just so you know. We're set up in a hideout near the docks. Come find us when you finish recruiting. Look for Lambur outside the door."
I'll find you when I'm ready to leave.
"There's three folks Captain Kaleen wants to help with her heist—Crafty Lerisa, Jakarn, and Neramo. She told me about 'em. Who do you want to know about?"
Where's Crafty Lerisa?

"She's in Saintsport. The Sea Drakes lured her ship onto the rocks. Those bastards really know how to ruin your day.
It's south of Port Hunding. Look for the big lighthouse."

"He's a brilliant Dwemer sage. Not that he's Dwemer himself, but he studies them. He's out at Bthzark, digging in the ruins there."

"He was tossed in the Grave. It's the prison beneath Headman Bhosek's palace. He throws people in there to forget about 'em!
You can get in through the tunnel in the river. Just watch out for the traps. There's lots of traps."

If you speak to her again, she'll only say:

"Those are the only people I heard Captain Kaleen mention."

After gathering crew for the heist you can find Nicolene in Captain Kaleen's Hideout:

"You're back! Found anyone else to help us with this heist?"
We're moving along.
"Ha! I knew you'd get it done. Who needs the old crew—those traitors!—when we've got you helping us?"

Speaking with her again:

"With you helping Captain Kaleen, we'll get the goods and be on the sea in no time!"

Complete the three prerequisite quests before Carzog's Demise and she'll come running up to you:

Ask her about the news:

"We need you back at the fortress. Right now!"
What's happening?
"Orc scouts sighted Bloodthorn Cultists in Carzog's Demise. Tazgol's mobilizing the army to go kill them all, but Lambur's worried. She thinks it might be a trap.
Did you find out anything?"
The cultists seek an Ayleid relic that can raise an invincible army.
"That's awful! I'll go find the captain.
Get back to the fortress and let Lambur know. Maybe it's not too late!"
"I'll warn the captain and the others. Hurry to the fortress!"

At Carzog's Demise, you can find Nicolene outside the ruin next to Captain Kaleen:

"We're with you. Captain Kaleen's going to lead us in as soon as you open the door."

Defeat Vardan and you'll return to the mortal realm to witness a schism among the crew:

"I need you to listen to me."
What is it, Nicolene?
"Keep the relic, please. My brothers are in the Covenant army. This could prevent war and save their lives!"
I can't promise anything.
"What do you mean? Didn't you hear me? Don't you dare risk the lives of my brothers! If you destroy that relic, I never want to see your face again."

If you destroyed the Ayleid relic, you'll find Nicolene mourning its loss and will bitterly scold you:

"You destroyed something that might have brought us peace. You've doomed my brothers. If I never see you again, it'll be too soon!"

After deciding what to do with the relic and speaking with the Chieftain back at the stronghold, Nicolene can be found at the Dockside Trading Stalls. Her reaction to you will depend on your choice, though she can still be asked the same questions as previously.

If you destroyed the Ayleid relic:

"I still can't believe you destroyed it. Do you know how many brave soldiers are going to die fighting off the Elves?
I don't even want to look at you."

If you let the captain keep the relic:

"Thanks for keeping the relic. You probably saved my brothers' lives!"

Back in Daggerfall, she'll add:

"I know the others have doubts, but that's their problem.
If Captain Kaleen believes the power of that relic can be used for good, I do too. You did the right thing! When I see my brothers again, I'll tell them what you did for them."

She has far less friendly words for you if you opted to destroy the relic, however:

"When the elves attack our shores and hundreds of our soldiers die, I want you to remember the choice you made. If you had kept that relic, we could have saved those soldiers.
You made the wrong choice."

Enter the Dead Wolf Inn and you'll find Nicolene at the bar worried about the location of someone:

"It's Kaleen. She's missing. She was supposed to meet me back here hours ago and, well … it's been too long. I think something's happened to her. No, I know something's happened."
Tell me what's going on.
"We're tracking a spy. Naruk. He worked for King Fahara'jad until he turned on the Covenant. Now he's inciting war.
Kaleen left to meet Sigil, a contact with info on Naruk. They were to meet outside town, off the road. She hasn't come back."
I'll look for Kaleen. You stay here in case she returns.

So you're working for King Fahara'jad now?

"Kaleen is. I'm working for her.
King Fahara'jad asked Kaleen to come after Naruk personally. He trusts her. We don't want anyone finding out one of the king's spies has gone rogue."
If you're here, what became of the Spearhead?
"She's still sailing. Master Kasan is at the helm while we're away. We've done so well against the Dominion that there're rumors King Fahara'jad's going to promote Kaleen soon.
I hope so. She deserves it. She's done nothing but good for the Covenant."

Tell me more about Naruk.

"He's a spy. Or he was until King Fahara'jad joined the Covenant. The king recalled his spies to Sentinel.
Naruk refused. He's founded his own group—the Children of Yokuda. They think the Redguard should rule Bretons and Orcs, not ally with them."

How are you doing, Nicolene?

You'll find an injured Kaleen in a dungeon beneath Shornhelm when Nicolene enters:

Speak to Nicolene and she will be unable to say the words:

Follow the captain's orders and head to the Abandoned Cistern behind Moorside Mounts. Enter and Kaleen, Nicolene, and a Spearhead Marine will follow:

Complete the mission and join the crew at the Dead Wolf Inn. Speak to Nicolene before speaking to Kaleen and she'll say:

"All the Children of Yokuda are dead or gone. We did it!"

After speaking to Kaleen, Nicolene can be spoken with again. Her final words will depend on the choice made back in Carzog's demise:

When leaving Stros M'Kai, she'll be aboard The Spearhead in the captain's quarters. At this point you can ask her about herself and the captain.

"I knew Captain Kaleen would get another crew together! When she wants something, she gets it!"
What can you tell me about this ship?

"The Spearhead's the fastest galleon on the seas! Master Kasan gave her to Captain Kaleen when he retired. He taught her all she knows about the sea.
Once the captain gets a new crew, we'll be off again."

What do you think of Captain Kaleen?

"She's amazing! She's smart, tough, and a real fighter. She's incredible with a sword, even for a Redguard who grow up using them. I've never met anyone like her."
How did you meet her?
"Well, it's kind of embarrassing. But funny!
I was living on the Wayrest docks, picking a few pockets here and there to get by. Then Kaleen came walking by, with a huge bag of gold swinging from her belt."
And you tried to steal it?
"I did steal it! She didn't even notice it was gone until I was halfway down the street, but boy, did she get after me. She can run!
When she caught me, I thought I was dead, but she offered me a job. She was impressed."
So you joined her crew?
"She said it was a good lift—taking her purse, I mean—and offered me an apprenticeship.
Sailing the seas, drinking and fighting, finding treasure—I love it. Captain Kaleen's an incredible mentor."

When you first landed on Betnikh, you can find Nicolene browsing in the market area:

"I wanted to pick up something nice for Captain Kaleen. Something to surprise her, like a new mug. But all this stuff is so expensive!"

After Betnikh, Nicolene can be found aboard The Spearhead at the Wayrest Docks. Her dialogue differs depending on the decision made about the Carzog's Demise Relic.

Nicolene can later be found reading in the Sentinel Palace. Her clothing will have changed, in light of the Captain Kaleen's and her own promotion. As before, her reaction to you will depend on your choice back in Carzog's Demise.

This Elder Scrolls Online-related article is a stub. You can help by expanding it.
Retrieved from "https://en.uesp.net/w/index.php?title=Online:Nicolene&oldid=2491852"
Categories:
Hidden categories: