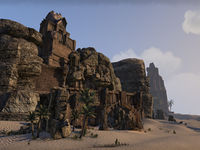 Bthzark is a Dwemer ruin in western Stros M'Kai. It is located west of Port Hunding. Wolves and assassin beetles lurk outside the ruin. A chest can spawn along the cliff south of the ruin's front entrance. 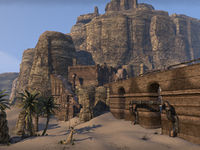 This location consists of two bridges that cross over the dunes of western Stros M'Kai. Both lead to the same place. If you take the eastern door and cross the eastern bridge, you'll encounter nine vents, each with a Guardian Spider in it. You'll have to fight these spiders to enter the mine on the other side. If you take the western bridge, you'll be navigating steam traps instead.

The Tempered Sphere awaits on the southern side of this room. Two Dwarven spiders dwell here; one is on the right as you cross the lava river in the middle of the mine, and the other is by the exit door, which lies through a tunnel to the southeast. 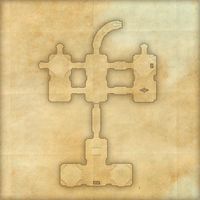 This Elder Scrolls Online-related article is a stub. You can help by expanding it.
Retrieved from "https://en.uesp.net/w/index.php?title=Online:Bthzark&oldid=2285352"
Categories:
Hidden categories: