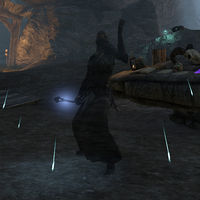 Vardan is an associate of Angof the Gravesinger. He plans to conquer Betnikh and then Glenumbra. 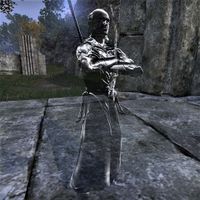 As you approach the ayleid ruin, you'll see a vision of Vardan and Drusilla Nerva:

Vardan: "Now, read the scroll! The ritual it holds will send you into the spirit realm."
Vardan: "Should you succeed, I will follow."
Vardan: "In the name of the Bloodthorns, enter the spirit realm!"
Vardan: "Failure again! Perhaps an ancient curse lingers here. I will try the ritual in our lair."

Inside the Inner Sanctuary of the ruin, Neramo will transport you to the spirit realm where you'll be able to engage him in battle:

Vardan: "You're too late! My army feeds!"

Inside the Bloodthorn Lair, you'll see a vision of Vardan again:

Vardan "At last—success! I can enter the spirit realm. The next phase of our mission can begin!"

This Elder Scrolls Online-related article is a stub. You can help by expanding it.
Retrieved from "https://en.uesp.net/w/index.php?title=Online:Vardan&oldid=2507989"
Categories:
Hidden categories: