This article is about the enemy in Cath Bedraud. For the version met in Coldharbour, see Angof the Undying. 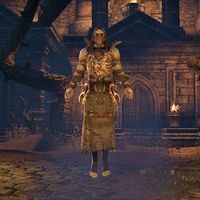 Angof the Gravesinger is a Reachman necromancer and the leader of the Bloodthorn Cult. He plans to conquer all of Glenumbra. You must fight him in the final chamber of Cath Bedraud. Similar to the Bloodthorn zombies, Angof is in a painful state of undeath himself, with twisted vines emerging from his back.

In death, Angof is sent to Coldharbour, where you will encounter him as Angof the Undying.

Lineage of Tooth and Claw[edit]

Once Gloria Fausta performs the blood ritual on a captured werewolf, you will witness Angof raising Faolchu from the dead.

The vision will fade and the werewolf will mock you for Duke Sebastian getting infected.

When you enter his sanctum in Cath Bedraud, Angof will be waiting for you.

This Elder Scrolls Online-related article is a stub. You can help by expanding it.
Retrieved from "https://en.uesp.net/w/index.php?title=Online:Angof_the_Gravesinger_(person)&oldid=2395071"
Categories:
Hidden categories: