The UESPWiki – Your source for The Elder Scrolls since 1995
< Elder Scrolls Online: Quests: Daggerfall Covenant / Betnikh
Jump to: navigation, search
My investigations of the Bloodthorn Cult's activities have convinced Chief Tazgol that they threaten the Orcs on Betnikh.

After you finish the last of the three previous quests Nicolene will approach you and tell you to talk to Lambur back at Stonetooth Fortress. Go there now and speak with her and she'll tell you how you guys need to catch up to Chief Tazgol near Carzog's Demise. Head north out of the fortress and cross the wooden bridge then turn east and go down the hill toward the ruins. At the ruins watch the scene and then talk to Neramo. He'll tell you the crystals near the door are activated by Welkynd stones he'll take one you get the other two. Go northeast across the stone bridge, turn east on the other side and go up the steep hill then run forward and activate the stone. Next talk to the Ayleid spirit lead him to the ruin entrance northeast of him and he'll help open it. Now from where you're at go west to the other stone and activate it as well. Talk to this spirit and lead him to the door as well. 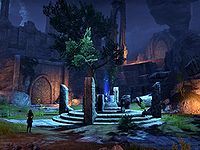 Use the stone to enter spirit's realm

Go through the door into Carzog. Go down the steps and follow the path until you come to Crafty Lerisa speak with her and she'll give you an outfit to help fool the guards. Now go down the stairs to the east and it'll open into a large room filled with cultists either fight them or ignore them, but leave the room through the hall on the opposite end of the room from where you came in. Continue down the hall fighting through the enemies and take either path to the hallway. Go down the hall and take the stairs up, at the top speak with Master Kasan. Now go through the door next to him and you'll see Jakarn if you recruited him. He shows you a shortcut. If you want you can take the hall next to the one he goes down, but it's just a long way to the same room. Run down the hall and turn left and continue if Jakarn is with you he will leave. Follow the path killing cultists as you go until you reach a door. Open the door and talk to Neramo. Now activate the Welkynd stone and kill Vardan on the other side. After you kill him go and activate the Ayleid relic. Now talk to Lambur and Captain Kaleen and then examine the relic. Choose to either take the Relic or destroy the Relic:

Lambur: "Strange that such a small thing can cause such terror. It must be destroyed!"
Captain Kaleen: "Hold on. Let's think about this."
Lambur: "What's to think about? It killed hundreds of Orcs!"
Captain Kaleen: "The cultists did that. In the right hands, this could defend the Covenant against invaders."
Lambur: "I'm not giving that thing to the people who leveled Orsinium!"

People who support taking the Relic

People who support destroying the Relic

Whether you take Kaleen's or Lambur's side, the other side will hate you, and their dialogue will be decidedly hostile from this point, although some, such as Lerisa, do not feel as strongly about it and will forgive you in time. Others from the Spearhead who weren't present may also comment on your decision when you return to town. After you've made your decision, talk to Chief Tazgol at Stonetooth Fortress for your reward.

If the vestige decides to take the relic it will be revealed that king Emeric would hand it over to the mages guild in Daggerfall eventually finding a way to empower it without using souls, and would be used on the Dominion forces on Daggerfall saving many soldiers and residents in the city from an attack shortly before burning out after use.

This Elder Scrolls Online-related article is a stub. You can help by expanding it.
Retrieved from "https://en.uesp.net/w/index.php?title=Online:Carzog%27s_Demise_(quest)&oldid=2595085"
Categories:
Hidden categories: