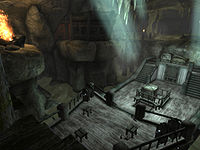 The interior of Dunbarrow Cove

Dunbarrow Cove is a medium-sized cave south of Anvil containing a home catering to thieves (plugin-specific).

This cavern becomes your property after the Dunbarrow Cove quest is completed. It is added by the Thieves Den official plug-in. 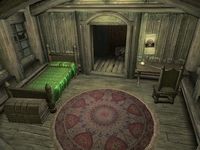 Dahlia can find the following crew members for hire, much like purchasing a house upgrade. Purchases from Dahlia are done via the Dunbarrow Cove Upgrades dialogue rather than using the standard purchase menu. One implication is that the following prices are fixed and are not subject to haggling.

More details are available on the Oblivion Houses page.

This upgrade provides a bed, chest, dresser, and cupboard, all located in the Captain's Quarters. The chest at the foot of your bed contains a Smuggler's Key that opens the door to the Anvil castle Dining Hall in Smuggler's Cave (see the page on Smuggler's Cave for details about where this door leads). This is also where you will find your cut of any loot acquired by your pirates. On the table you will find four lockpicks and a steel cutlass and on the wall is a Gray Fox poster. 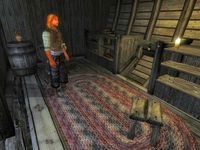 Jak Silver and some of his wares

Jak Silver is a male Imperial Nightblade who can be found below-decks on the Black Flag. If your mercantile is less than 50, Jak only sells lockpicks and potions.† At higher mercantile levels he also sells weapons, and armor (including enchanted versions). The potions include Nightmask potions that are only available from Jak. He also provides training in Speechcraft up to level 75. Many other items also become available (for free) in the room belowdecks where Jak Silver is located. Five chests in the lowermost deck of the Black Flag can be used to store loot.
† 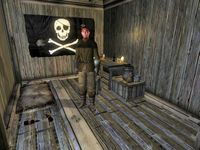 Khafiz in his "store"

Khafiz is a male Redguard who can be found on the main deck of the Black Flag or in the small cave to the north. He sells lockpicks and a selection of weapons and armor (including enchanted items); he will buy any items. Khafiz also provides training in Mercantile up to level 75. The fence upgrade includes Bacon, an unkillable pet boar who can be used for easy training of combat skills. (Warning: This may cause him to permanently attack you. However, he won't leave Dunbarrow Cove in this state.) 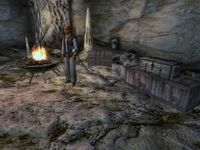 Tahm Blackwell and his crates

Tahm Blackwell is a male Imperial who can be found in the northwest corner of the main cave (near the entrance from Smuggler's Cave); he sells potions and scrolls. The only potions he sells are Potions of Magnification that cannot be bought anywhere else. The only scrolls he sells are standard Open scrolls. He also sells several spells, some unique, that provide Fortify Sneak, Security, and Open effects. Tahm provides training in Security up to level 75. The upgrade also includes a Training Chest that can be used to train your Security skill: it has a Hard lock and every time you open it, it immediately locks again. 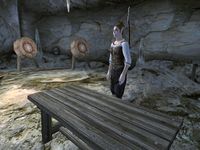 Melliwin the Mongrel is a female Bosmer who can be found in the southeast corner of the main cave, along with several archery targets. She sells bows and arrows (including enchanted ones; some of the arrows are newly introduced by this plug-in and only available from Melliwin). She also sells several spells, some unique, that provide Fortify Marksman, Sneak, Agility, and Speed, and Soul Trap effects. Melliwin provides training in Marksman up to level 75. 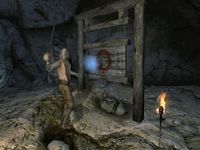 Kovan Kren is a male Dunmer Nightblade who can be found in the northeast corner of the main cave, where he is usually practicing Blade skill on the target found there. Kovan sells armor (including enchanted items); he also buys books, clothing, and potions. The armor includes Gauntlets of the Manhunter, Silenced Boots, and Silenced Gauntlets that are not available anywhere else. He also sells several spells, some unique, that provide Fortify Blade, Fortify Sneak, Chameleon, Charm, and Invisibility effects. Kovan provides training in Sneak up to level 75.

The more upgrades you purchase, the more well known you become as a pirate. You will receive messages telling you that certain pirates have heard about you and have joined your crew (in addition to the merchants you have already hired):

Once all upgrades have been purchased, the quest is completed and you will have obtained the ability to send the three pirates who joined your crew out to pillage and plunder.

Once upgraded, you can find the Smuggler's key in a chest located in the captain's quarters. This will allow you to open the second door in Smuggler's Cave and enter the castle via the dining hall.

See Dunbarrow Cove Items for a list of items added by the Thieves Den plug-in.

While Dunbarrow Cove comes with many storage options, not all of the containers are safe; the contents of most containers will be reset after three days. Containers in Dunbarrow Cove that are safe for long-term storage include: