Tools are assorted utility items that have a variety of uses.

Lockpicks are used to pick locks on chests and doors. They are found in containers everywhere and can stack up to 200. Lockpicks can be used many times if you're careful enough when picking locks and avoid breaking them. Pressing a tumbler for too long increases the chances of breakage, and the difficulty of the lock also has an effect. If you force a lock, you will always break a pick.

Crown Repair Kits are purchased from the Crown Store or received in Crown Crates or Daily Rewards. These items will fully repair all of your gear at once.

These items are used to repair keeps and other structures in Cyrodiil.

Soul Gems are used to recharge weapon enchantments or resurrect yourself or other players who have fallen in combat. Normally, these are found as Soul Gem (Empty) and can be filled by using the Soul Trap spell or the Soul Lock passive ability. Once filled, they can be used for recharging and resurrecting.

Crown Soul Gems can be purchased from the Crown Store or received via Crown Crates or Daily Rewards. They are always pre-filled, but they are otherwise identical to standard Soul Gems.

Prior to Update (?), there was a range of soul gems at different levels. Afterwards, all Grand Soul Gems were renamed to simply "Soul Gem", and the lesser ones became useless.[verification needed — Or could they still be used? I forget.]

Within the game, various tools are used as weapons and armor by NPCs. Some of them are available to players as items or outfit styles, while almost all of them can be cosmetically used by players in Emotes.

"Lifts-Her-Tail: 'But, my lord, your broom is so very long and stiff! To move it back and forth, I shall have to use both hands!'" — Excerpt from The Dusty Argonian Maid

Crowns as part of the Pay to Lose category added to the Crown Store for April Fools' Day 2017.

"A Bucket helm? Nope, sorry—who would wear such a thing? It's far too silly and undignified. Be off. …Ha ha ha, fooled you! That sounds splendid! Where can I get one?" —Sir Cadwell of Codswallop

Crowns as part of the Pay to Lose category added to the Crown Store for April Fools' Day 2017. 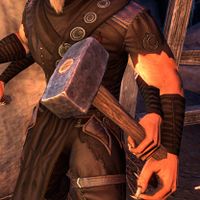 Hammers are One-Handed maces that are currently unobtainable. They are used by some NPCs such as New Moon Apprentices. They can also be used as part of the /hammer emote (along with /smash, /hammerlow, /hammerwall). 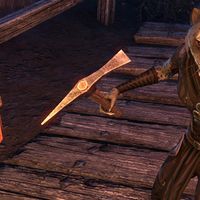 Pickaxes are One-Handed and Two-Handed weapons. The two-handed version is available as the Antiquarian's Pickaxe Style, but the one-handed version is currently unobtainable. They are used by some NPCs such as New Moon Apprentices, Black Dart Croppers, and Treasure Hunters. 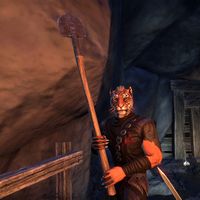 Shovels are Two-Handed weapons that are currently unobtainable. They are used by some NPCs such as New Moon Apprentices, Black Dart Drudges, and Treasure Hunters. They can also be used as part of the /shovel emote.