Lockpicking is something all players can do and is not a character skill or ability but simply a mini-game. It is required to open locked chests found randomly in the world, as well as the various locked doors and safeboxes in cities.

Before a player can pick locks, they must have at least one lockpick in their inventory. These lockpicks can be bought from vendors or found in furniture.

If the lock you are picking is marked with a red Unlock prompt, the lock is owned. If an NPC spots you while you are unlocking the lock (aka. in the minigame) you will gain a bounty. Thus before attempting to pick the lock, crouch and ensure that you are completely "Hidden" before you proceed. This does not apply to unowned locks, such as those on treasure chests found in the wild.

Locks come in five difficulties: Trivial, Simple, Intermediate, Advanced and Master. All locks have five pins that must be correctly set in order to succeed, but higher difficulty locks have pins that move faster, making it harder to land the pin in the correct position. All locks also have a timer. If the timer runs out, the attempt fails and there will be a short cooldown period before you can attempt to unlock the lock again. Higher difficulty locks have shorter timers (Trivial: 60, Simple: 25, Intermediate: 20, Advanced: 15, Master: 10 secs), thus precision is needed. This cooldown also applies if you choose to abandon the attempt early by pressing "Esc" while in the minigame. 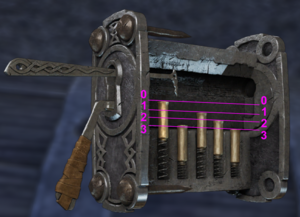 To begin, move the mouse to over one of the five pins. The order you do them in does not matter. Press the mouse button to begin to depress the pin. When the pin wiggles, release the mouse button. If done correctly, the pin will remain in the lowered position, meaning that it is correctly set. Repeat this for all five pins to unlock the lock. There are only three positions that a pin can occupy, as shown by the picture. 0 is the initial position.

If you continue to hold the mouse button down even when the pin wiggles or release the mouse button too early, the pin will snap back to the original position as a penalty. You will then need to depress the pin again, possibly wasting precious time. When pins snap back they will also damage your pick, and if the pick is damaged enough, it will break.

When all five pins are set, the lock opens and you may loot the container. Opening the lock also grants you a small amount of leveled experience, as well as Legerdemain points. (Simple: 1, Intermediate: 2, Advanced: 4, Master: 8)

If you do not want to go through the lock picking minigame, you can press R to force the lock. If you are successful, the lock is immediately opened. If you fail, you will need to wait a while before you are allowed to attempt the lock again. Note that forcing the lock will always break your pick, even if you are successful. Forcing a lock will not grant you experience or legerdemain points, so only use it sparingly.

The default chance of forcing a lock depends on its difficulty (Trivial: 100%, Simple: 15%, Intermediate: 10%, Advanced: 5%, Master: 0%), but this chance can be improved by adding points to the Locksmith skill in the Legerdemain skill tree.

There are ten Achievements related to Lockpicking.

This Elder Scrolls Online-related article is a stub. You can help by expanding it.
Retrieved from "https://en.uesp.net/w/index.php?title=Online:Lockpicking&oldid=2400775"
Category:
Hidden categories: