The UESPWiki – Your source for The Elder Scrolls since 1995
< Online: Quests: Summerset / Story Quests
Jump to: navigation, search

With the Crystal Tower saved, Valsirenn wishes to call a meeting of Summerset's most influential leaders to ensure its future protection. 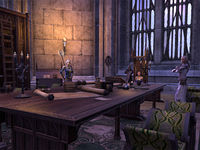 "Everyone's gathered in the council chamber. You should go inside." 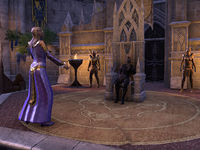 "Our throne, Razum-dar. We would have it back now." 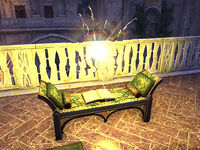 "So... this book just magically appeared in front of you?"

Having faced down Nocturnal and her plot to control the Crystal Tower you must now face your greatest enemy of all: High Elf politics. The Psijic Order and Sapiarchs have arranged a meeting with Proxy Queen Alwinarwe in the Alinor Royal Palace to ensure the Crystal Tower is adequately defended by all parties. Before leaving Ceporah Tower you must talk to Oriandra and Sotha Sil, the latter respectuflly declining the invitation to take part in talks.

Three of the following will be chosen from the table below to be brought in to sway Sapiarch Larnatille. Should only the main quest have been finished, without completing any side quests, then it will always be Kinlady Avinisse and Canonreeve Farmeldo brought in with Razum-dar concluding.

After the quest has been completed, as you head out to Alinor, a terrified Bailiff Ellidoril will run down the balcony stairs to Bailiff Calbalion spluttering about a mysterious book that magically appeared in front of him. Head up to the balcony to find a final message from the Golden Knight.

This Online-related article is a stub. You can help by expanding it.