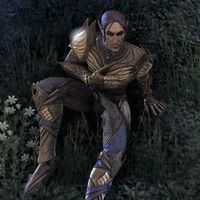 Justiciar Hyircil is an Altmer member of the Divine Prosecution leading the investigation into unexplained deaths at Cey-Tarn Keep with Revelator Lindafwe.

"Two arrests in one day. This is going to reflect well on my next report."

Arresting me would be a mistake. I found evidence of a Daedra summoning ritual.

"Oh, did you? Well, let me see it then.
The Insatiable, is it? Who writes this rubbish? Grisly rubbish at that. I'll admit the methods are similar to our case, but this still doesn't prove the presence of an actual Daedra. Where did you find this?"

A hidden room here in the keep where that ritual took place. Silurie's tracking spell led me to it.

"I was never informed of any architectural eccentricities, something the garrison will answer for, so that spell might have some merit.
Silurie claims it was leading her to a Daedra hiding in the cellar. Are you willing to stake your freedom on that?"

I think you should start listening to Silurie.

"To be clear, when all is said and done with this, I'm arresting you anyway, but I'll indulge this line of inquiry. If you're right, I'm sure your cooperation will reflect favorably in your trial. Fleeing will not.
Am I understood?"

At this point you'll hear the following exchange:

Once you enter the cellar, the conversation will continue:

"Well, I think we might be on the right track. Ow."

"Our Daedra summoner, no doubt. No one I recognize. Begs questions, but that can wait.
Give chase and find Lindafwe! Silurie went after her, but there was an awful lot of screaming."

Do you know where they went?

"Through those doors. Down where we keep the wine. This place, it's Cey-Tarn, but different. I'm probably not making much sense, am I?
Helping the others falls to you now. Terribly sorry about that."

While in The Gorge, a short scene plays out:

Silurie : "Ah! I'm all right! I'm all right! Somehow …."
Revelator Lindafwe : "This way! Quickly! I can't hold this open for long!"
Justiciar Hyircil : "Well, I've had my fill of this place. Let's excuse ourselves before anymore dinner guests arrive."
Silurie : "I might fast for a month after this."

Exiting The Vaults of Heinarwe, he'll cheerfully tell you:

"I didn't think I'd see you again after we parted ways before. I'm pleased to be wrong, for once. Lindafwe, Silurie, and I all owe you our lives."

After officially completing the quest, you can ask him more about the investigation:

"You broke more than a dozen statutes with your antics today. Regulations state that I should place you under arrest … but I'm thinking we haven't been following much procedure today anyway."
"Thank you for your assistance in this investigation."

Why were you so mistrustful of Silurie? If you accepted her help earlier it could have saved lives.
"I should have, shouldn't I? She was once among the best members of the Divine Prosecution, but too cavalier for most and far too interested in unconventional methods for our superior's tastes. For my tastes."

"She believed the Prosecution would be better served by employing methods devised outside of Summerset. Foreign ideas, foreign magic. She faced censure many times. Frustrated, Silurie left the order to strike out on her own."

You didn't actually answer my question.

"Won't let me off that easy, eh? Right. I didn't believe her because I didn't want to believe she was right. Because I still resented her selfishness in walking out on her duty. And on us. Lindafwe and I didn't agree with her, but we stuck by her."

"She was right. We are stubborn and stolid. If we continue to believe our way is the only way, we're going to unprepared for the changes ahead. The Queen's decree will bury us.
Convincing the Divine Prosecution of that? It'll be a long, hard road."
I'd like to talk to you about your investigation.
"Yes, I imagine you do. You've earned that right. What in particular do you want to discuss?"

Teraniel wasn't working alone. Any idea who is behind all this?
"From what Lindafwe told me about what you found, I do have a theory, but you didn't hear it from me. In fact, I would suggest you do not repeat it to anyone who you do not implicitly trust.
I believe this is the Court of Bedlam's doing."

"A secret society I've only caught hints of. Very influential. More than one of my investigations has ended prematurely because I caught a whiff of them. I can't prove that, of course, but a Justiciar knows.
If you cross paths with them, be careful."

Do you know what they want?

"Nothing good, I wager. I don't know what they're after, but this is not the first time I've seen the heretics wield Daedra to their ends. Where there are Daedra, trouble is sure to follow.
Silurie is going to be very busy when we find them."
What's your next move?
"A trip to the apothecary and the keep's wine rations, not necessarily in that order. Fortunately, I don't need to be fighting fit to review evidence.
I hope that by the time Lindafwe, Silurie, and I are fully on the mend we'll have some solid leads."

"Not directly. It's an official investigation. People will be watching. I need to tread carefully."
"You have good instincts, a sense of justice, and the might to wield it. When all is said and done, I suspect we'll only arrive to clean up after you."
Actually, there are some other things I wanted to ask you first.
"By all means. I'm not going anywhere … quickly at any rate."

What happened to the portal?

"Closed, for now. Lindafwe bridged us here for our safety. I imagine Teraniel did something similar to enter Cey-Tarn Keep undetected. A dreadfully potent ability in the wrong hands, as we've seen.
The books you found will need to be sealed away."

What about the altar? Couldn't someone else use it?

"Its purpose wasn't to open the portal, though its power does pose some concerns. It would be heresy to destroy an Aldmer artifact, but I will recommend that those ruins be patrolled regularly from now on."