The UESPWiki – Your source for The Elder Scrolls since 1995
< Oblivion: Quests
Jump to: navigation, search

This page is for unimplemented quests. Fragments of some of these quests remain visible in the game. Quests that do not appear in your journal are not classed as unfinished.

Concept art of Chorrol with an amphitheater

Originally, there was meant to be an arena in each city. The only two that remain in the game are the Imperial City Arena and the destroyed Kvatch Arena. Writer Emil Pagliarulo confirmed that this was the case in the eighth episode of the Bethesda Podcast, celebrating the fifth anniversary of Oblivion. However, there was too much dialogue and it could not fit on the disk. Removing the other arenas meant that about 800 lines of dialogue could also be removed. 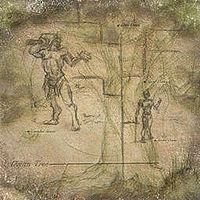 The quest used in the demo videos shown at E3 2005 still exists in the game files, but cannot be completed as was shown at E3, since most of the references used in the quest have been deleted from the released game and the appropriate scripts have been commented out. The quest contains stage numbers 5, 10, 20, 30, 40, 42, 50, 52, 53, 54, 55, 56, 57, 58, 59, 60, 62, 64, 66, 68, 70 and 100. Only stages 5 and 40 to 100 actually work in the game. One of the loading screens used to describe the technical aspects of the game still exists in the game files. Its text is "Realistic lighting and shader effects combine to create detailed and immersive environments." and its editor ID is Widescreen1ElvenArmor. It is set to only load in the test cell ToddDung. The version of Kvatch used in the E3 demo also exists in the game files and can be accessed by typing coc e3kvatchstart into the console. You can begin the Kvatch portion of the quest by typing setstage e3 40 into the console, but you will have to advance the quest manually at some parts.