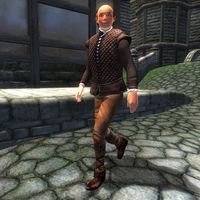 Eugal Belette is a Breton warlock living in Chorrol. He claims to be new in town, but carries a dark secret; he is a Mythic Dawn sleeper agent, and will attack you on sight upon the completion of the Dagon Shrine quest.

Rumors around town reveal that other Chorrol citizens have noticed him acting strangely, and that odd noises have been coming from his house at night. As his basement is filled with Mythic Dawn paraphernalia and alchemy equipment, this might very well hold true. Furthermore, he spends the entire night down there, from midnight until his bedtime at 6am. He wakes up at midday, exits the house, and takes the small walk down to the Oak and Crosier, where he will spend four hours wandering around and talking with the other regulars. On the 4th, 5th, and 6th of each month, this will also include his "friend" Ulen Athram. At 4pm, he heads home, and once again enters the basement to spend another two hours down there. He surfaces at 6pm, when he will eat dinner on the ground floor in his house. At 8pm, it's time for his evening walk near the South Gate, where he will stroll around until midnight.

His attire consists of a pair of doeskin shoes, a quilted doublet, and tan linens. He also carries around a copy of the Conjuration skill book Mythic Dawn Commentaries 1, his house key, and a small amount of gold. He knows all major Destruction spells and the standard Mythic Dawn Armor and Mace spell.

When you approach him, he won't really tell you anything except his name: "My name is Eugal Belette. I'm pretty new here – don't know a soul." If you ask him about the city he lives in, you don't get much wiser: "I'm sorry. I'm new in town, and don't know anyone."