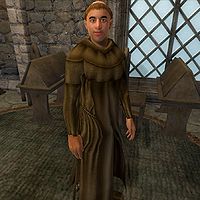 Brother Piner is an Imperial monk living at Weynon Priory, together with fellow monks Prior Maborel and Jauffre, and herder Eronor. He was training to become a Blade before he became a monk in the Order of Talos. He can provide you a free copy of The Warp in the West, a Block skill book, after completing the quest Deliver the Amulet.

He sleeps every night between midnight and 1am, when he briefly wakes up before getting back in bed. Due to a bug, if you wait at any time during his slumber, he will wake briefly, walk to the staircase, then get back in bed. He then gets up at 5am and goes down to the chapel. He stays there until 10am, when he takes a trip to Chorrol to visit Seed-Neeus at Northern Goods and Trade. However, as soon as he enters the store, he leaves and goes back to Weynon Priory to wander aimlessly upstairs until 6pm. He then goes downstairs and sits down until 8pm, when he goes back upstairs and wanders until going to sleep at midnight.

He wears a curious mix of lower and middle-class attire: a monk robe and pigskin shoes. He also carries the Block skill book The Warp in the West, which he may give to you; a bread loaf he will consume and a meager amount of gold. He is armed with an Akaviri Katana.

Should you enter the priory house at night, before you deliver the amulet, you can ask him about Weynon Priory, and he'll provide some information: "We're a Nine Divines priory dedicated to the Order of Talos. Lord Talos teaches us to be prepared to protect his people in peace and war. I'm on night watch here, in case someone needs the chapel, or wants to talk... or has mysterious business, like you. I was just writing a letter to my mother. She's quite upset by the assassinations." Indeed, several crumpled notes can be found on the table in the priory, suggesting he had a hard time writing an appropriate letter. The Letter to Mother appears to be the final version.

After having delivered the amulet, he'll provide a little more details on these topics. On the Order of Talos, he'll reveal the ties with the Blades: "It isn't widely known, but many brothers of the Order of Talos are also members of the Blades. Chapterhouses of the Order, like Weynon Priory, provide safehouses for travelling Blades as well as our more public religious functions. Blades who are too old for active service often join the Order as lay brothers. We are honored to have Grandmaster Jauffre, or Brother Jauffre as he prefers, as a resident here." On the Blades he'll provide some personal information: "The Blades are closely linked to the Order of Talos. We both serve Talos, of course, and many of our brothers are former Blades. I myself was training as a Blade when I received the call to serve Talos in a different way."

With a disposition of at least 60, Prior Maborel will reveal, "Brother Piner is a fine young monk, zealous and energetic. In time, I hope he may add patience and prudence to his list of virtues." 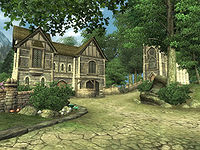 Should you first enter the priory at night, on your way to deliver the amulet, Brother Piner will approach you, somewhat surprised of your visit: "Excuse me. Can I help you? Are you looking for Prior Maborel? Or Jauffre?" If you tell him your business is private, he'll show a bit of good humor: "I see. Strange visitors appearing late at night... happens all the time here. Go on. I think you'll find what you're looking for upstairs." If you tell him you must speak to Jauffre, he'll erroneously tell you he's sleeping (since Jauffre will be reading at his desk day and night at this point): "I think he's sleeping. But it must be important... go ahead upstairs and wake him."

Otherwise, if you greet him for the first time, he'll welcome you: "Welcome, good citizen. I'm Brother Piner, and this is Weynon Priory. A monastery. Can I help you?" On the topic of Jauffre, he has a number of responses depending on the time of day and location, which may again contain false information due to the fact Jauffre spends all his time reading at his desk. His usual response, in the vicinity of Weynon Priory, will yield, "Oh. Yes. He'll be in the Priory House somewhere." Inside the priory, he'll say, "Brother Jauffre? He should be in the Priory House, I think.", and otherwise: "If he's not in the Priory House, you may find him praying in the chapel." Finally, if you ask inside the priory between 10pm and 6am, he'll instead claim, "He sleeps with us here in the Priory House."

After delivering the amulet, you may ask for assistance, and he'll give you his copy of The Warp in the West: "Here. Perhaps you will find this useful. One of the books I saved from my Blades training. You go into danger. Jauffre didn't tell us any more than that, but know that our prayers go with you." 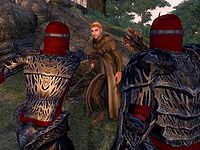 When you bring Martin to Weynon Priory during the eponymous quest, you'll discover it is under attack. If you approach him during the fight he may shout: "I could use a hand here!" Provided he survives the initial attack, Brother Piner can be spoken to: "Gods blood! They came out of nowhere. Have you seen Grandmaster Jauffre?" If you reply you don't know where Jauffre is, he'll suggest, "We should check the Chapel. Come on!" If you mention Eronor claimed he was in the chapel, he'll exclaim, "Quick! He may need our help!" Should you try to speak to him again, he'll just angrily say, "Come on! We need to help the Grandmaster!" Once Jauffre is safe, he'll have time to mourn the loss of Prior Maborel when you speak to him: "Poor Prior Maborel. He was dead when I came outside. Who could have done this?", or he may thank you for helping out: "Thanks for your help. I didn't think any of us were going to survive the attack."

If he survives the ordeal, he will remain to tend the priory alone, given the fact that Jauffre moves to Cloud Ruler Temple.