The UESPWiki – Your source for The Elder Scrolls since 1995
< Oblivion: Quests: Bruma
Jump to: navigation, search 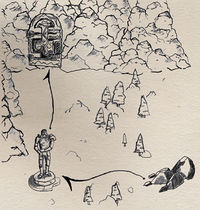 Map to the Pale Pass entrance, as penned by an Akaviri messenger

Once your fame is at least 10, you may hear rumors in Bruma about the Countess and her collection of Akaviri artifacts. Talking to townspeople about the subject will direct you to the Countess's herald, Tolgan, for further information. Such effort may not even be necessary, as Tolgan himself is actively seeking you out. He tells you that the Countess would like to speak to you and hands you a stipend of 25 gold coins. When you meet the Countess, she will inform you of her task: retrieve the Draconian Madstone. As a reward, she offers another item from her own collection. Once you accept the task, she reveals that she has the diary of a messenger sent to Pale Pass, the last known location of the Draconian Madstone. Talk to her about the topic "Diary". She tells you that she has already sent scouts looking for Pale Pass, and they found the first of the landmarks mentioned in the pages of the diary, Dragonclaw Rock. The Countess gives you a translation of the messenger's diary and a copy of a map sketched in the diary; a marker for Dragonclaw Rock is added to your map.

Travel to the place that the Countess marked. The rock looks just like its namesake, a giant lizard foot. Whether you read the diary doesn't matter; your next step is to go due west from the dragon foot until you find a large statue called The Sentinel, the second landmark. From The Sentinel, go due north. It shouldn't be long until you find the third landmark, Serpent's Trail. The Serpent's Trail is an underground tunnel leading to Pale Pass. See the Pale Pass article for a map of this area. You may also find the messenger who penned the diary that has led you here, from whom you can take a set of Akaviri Orders. At the other end of the tunnels, you need only follow the winding path north to reach the ruins. There are likely to be a lot of Pale Pass Ogres. 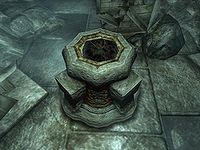 Once at the ruins themselves, search within the broken walls for the entrance into the Mouth of the Serpent. The article on Fort Pale Pass provides maps of this fort. Watch yourself inside the fort; it is filled with traps built so well that they work even now. Go from Mouth to Scales (or Eyes) to Fangs to Venom within the fortress. You'll be fighting Undead Akaviri Soldiers as you go, and will likely be hit once or twice by deadly traps, so this place can be a pain (and, annoyingly, the skeletons' Ruined Akaviri Blades are almost worthless). Once you finally enter the Venom of the Serpent, you will see the Akaviri Commander, Mishaxhi.

Speak with Mishaxhi to find that he is still waiting for those orders. If you have them (see Serpent's Trail above), you can send him away by handing him the tablet. If you don't have the tablet, fighting him is also an option. However, if you give him the orders, any remaining Akaviri soldiers will stand down (die), and the fort will be put "at peace". The Commander is a ghost, so if you choose to fight him, remember that he is immune to normal weapons.

After the Commander is dealt with, enter the room behind him and find the amulet on a pedestal in the back of the room. With amulet in hand, return to Countess Carvain. Your reward for bringing her the amulet is the leveled item Ring of the Vipereye, which fortifies your agility and provides you with a resistance to magic.