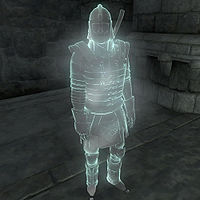 Akaviri Commander Mishaxhi is a Tsaesci Warrior whose spirit haunts Pale Pass, an ancient command post high in the Jerall Mountains north of Bruma. He was one of the Akaviri's greatest tacticians during the Akaviri Invasion, but he was trapped in Pale Pass with his troops by a great landslide. His spirit has remained in the fort guarding the Draconian Madstone for more than a thousand years, waiting for his official orders.

You will find the Commander standing guard in the depths of Fort Pale Pass, specifically in front of the hidden wall in the Venom of the Serpent zone. If you hand him the Akaviri Orders he will turn around, reveal the tunnel leading to the Draconian Madstone, and disappear forever. If you manage to upset him, he will immediately draw his katana and attack.

He is equipped with a complete set of blades armor and wields an Akaviri dai-katana. He also carries around a brown shirt and a pair of light brown linens as well as a small sum of gold.

When you encounter Mishaxhi in Fort Pale Pass he will mistakenly call to you, thinking you are the messenger. "We have awaited your arrival, messenger." Speaking to him will have him ask if you have the message he was waiting for: "You have made a long and perilous journey, but there is no time to rest. The Army of Reman is at our doorstep, and our supplies have dwindled. We have awaited your arrival. Tell us, what news do you bring from Akavir?" If you tell him you have come for the Madstone he will become agitated and will attack after saying: "How dare you address me that way, soldier! Your insolence will not be tolerated!" If you claim that you are a soldier with the Army of Reman he will attack you to protect his fort from his enemies: "Then prepare for battle! I'll not let this fort fall to the dogs of Reman!" Telling him that you have his orders when you do not will have him also attack you, after saying: "Lies do not befit a soldier of Akavir!" During his attacks, he will shout: "You'll taste my steel, Reman dog!" or "Die, cur!"

If, however, you give him the message, he will thank you for completing the perilous task. "Well done, soldier. Your mission is complete, and you have my thanks. Now we may rest. Long live the Akavir!" Regardless of which way you deal with him, once he is put to rest a passage behind him will open up, making it possible for you to retrieve the Draconian Madstone.