Note: This quest does not appear in your journal. You must start Lifting the Vale quest before Pale Pass even shows up on your map. 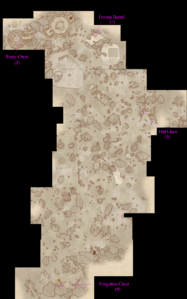 All chest locations on the local map

When to Begin the Quest[edit]

While on the quest Lifting the Vale, you will go through the Serpent's Trail to Pale Pass and follow the path to the ruined fort. Once you reach the ruined fort, you're ready to find the treasure.

There are four containers to be found. The first three have a key to the next container, and the last one has the Circlet of Omnipotence.