The UESPWiki – Your source for The Elder Scrolls since 1995
< Lore: Factions: O(Redirected from Lore:Knights of Saint Pelin)
Jump to: navigation, search 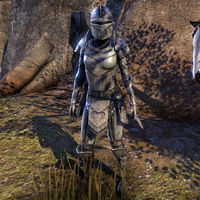 A Knight of Saint Pelin

The Order of Saint Pelin[1] or Knights of Saint Pelin is a knightly order of the kingdom of Evermore in High Rock.[2] The order is named after Saint Pelin, who sacrificed himself to defeat the Gray Host as they assaulted the Bangkorai Pass in the early-mid First Era.[3] They are responsible for maintaining a library of obscure historical scrolls at Bangkorai Garrison[4] and have been called upon for the defense of the capital city on occasion.[2][5] They are responsible for holding the Bangkorai Pass and protect the weak, in hopes that they can be as brave and humble as Pelin.[6] 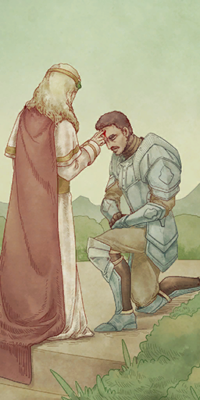 The exact date of founding of the organization is unknown, but years after the sacrifice of Pelin, during a period known as late Pelin's martyrdom, all of the soldiers from Bangkorai Garrison already carried blood soaked clod lacquers containing the symbol of the Knights with dirt from Bangkorai inside and with the blood within all belonging to the same person but it is unknown if that person was Pelin himself. Those clods were speculated to have likely been created by the organization given their penchant for bloodletting rites.[7]

During the year 2E 542, the Order of Saint Pelin helped Duke Blaise Guimard in the retaking of the city of Evermore from the forces of Emperor Durcorach the Black Drake. The success of the charge led Blaise to acquire the throne after he was elected by the nobles of Bangkorai and lifted House Guimard to the position of royalty.[2]

By 2E 582, Evermore was governed by King Eamond who called forth the knights and other local forces in the defense of Bangkorai when Magus-General Septima Tharn advanced against the region.[8] Despite the call to action against the Imperials, a threat in the form of hordes of Reachmen coming from the north later claimed his life.[9]

With the death of King Eamond, Bangkorai Garrison was placed under lockdown with only the Knights of Saint Pelin and members of the royal family of the kingdom being allowed inside as the queen was mourning. Some time later during the period of the Alliance War a guard defending the garrison informed the Vestige about the threat of the Reachmen invading the region and that he sent some knights to investigate Reachfolk activity, with the hero later discovering that the group was killed.[10]

Meanwhile, Bangkorai Garrison was taken by Imperial legionnaires under the command of Septima Tharn and many knights were killed,[11][12] with one of the reasons for the defeat being knights being that one of their knight commanders drew forces away from the garrison in order to defend one of their camps at Martyr's Crossing from enemy troops.[13] Forces of the Knights of Saint Pelin alongside those of Daggerfall Covenant and Evermore led by Emeric and the Queen of the region were later able to liberate the garrison with the aid of the Vestige despite the efforts of the legion who even summoned a Dark Anchor in the garrison's courtyard to aid in their own defense of the position, but to no avail as the location was still retaken and the anchor destroyed.[14]

At that time, they also aided in the recovery of the Memory Stone of Makela Leki, a rare magical gem which contains the thoughts and experiences of the redguard sword-singer which the stone originally belonged to.[15] The action was done as an assistance to King Eamond as he meant to give it to King Fahara'jad as the stone had found itself in Evermore's territory after a group of Redguard exiles sought refuge in the kingdom, although they were not trusted by the king of that time and were instead taken as prisoners, eventually dying in their prison which became their own crypt.[16]

Imperial Legion skirmishers were also raiding one of the camps of the knights at Martyr's Crossing which was located in an important trade route between north and south Bangkorai and were stealing their supplies, an action which led to the dependency of the knights of that camp in the Baandari for help, but without paying them.[12]The Vestige convinced one of the traders to offer healing poultices to the order with either their skills of bride, persuasion or by trading Alessian bows in exchange for what was needed, however, the trader himself did not actually have the poultices yet.[17]

As the Vestige was looking for for herbalists who had been sent to acquire the ingredients to make the poultices, they discovered that a new raid was coming to the camp. Both the Baandari, the Vestige and the Order defended the camp, having success in doing so and then using the momentum in order to burn the boats of that the Imperials were using to arrive in the area. The destruction of the transports marked the defeat of the forces attacking the camp and allowed for a better relationship between the knights and the traders thanks to the help offered by the Baandari.[18]

Those situations combined were able to put enough strain in their forces that the Order was not able to send knights to investigate the Imperial infiltration at the Hall of Heroes, a sacred burial place of famous Redguards like Frandar Hunding, Divad Hunding and Makela Leki, instead they had to ask Evermore itself for soldiers to deal with the situation after the infiltration was informed to one of their commanders.[19] This request was one of the factors that culminated in an attack against the area with forces of the soldiers of Evermore moving to liberate it.[20]

At some point, they quashed rumors about a possible return of the Gray Host, assuring veterans and others of the Bangkorai Garrison that not a single bone of the old enemy army remained in the earth.[21]