The UESPWiki – Your source for The Elder Scrolls since 1995
< Skyrim: Hearthfire: Construction
Jump to: navigation, search 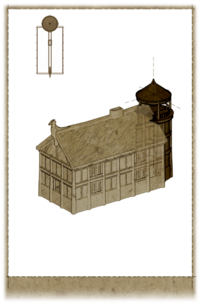 This article is about the home addition to houses that can be built with the Hearthfire add-on. For general information about alchemy labs, see Alchemy Labs.

The Alchemy Laboratory is one of the North Wing additions you can build to expand your home from the Main Hall. The tower can hold a large variety of storage options, as well as many alchemy-dedicated bins and containers. Plenty of ingredients are spread about when the tower is fully furnished.

The Alchemy Laboratory, like its counterparts, the Library and Enchanter's Tower, has a balcony area on its roof when completed. A roof canopy can be added to these towers if desired, but not adding the final roof canopy does not prevent the tower from being inhabited, allowing it to be an optional addition. Once you have built the roof, then you can build all interior items in the tower.

The following is a list of possible furniture items and decorations which can be added by using the carpenter's workbench in the Alchemy Laboratory . It is not necessary to purchase or build all furnishing options; you can pick and choose to better dictate style. However, all furnishing options are in a pre-arranged location and only ingredients and standard items can be moved. Oftentimes, the name of the furnishing option only indicates the primary piece of furniture, and actually includes various additional containers and accessories.

A number of miscellaneous items are added with various furnishing options, but only notable items are specified on this table—specifically, usable containers and alchemy ingredients. Though other common items are added to your home, they are not listed here.