The UESPWiki – Your source for The Elder Scrolls since 1995
< Redguard: Quests
Jump to: navigation, search

The game begins with Cyrus aboard Brennan's ship on the way to Stros M'Kai. As he approaches the end of his voyage, a group of outlaws called the Restless League intercepts them. Two pirates armed with sabres swim across the gap from the League ship and threaten Cyrus. Brennan is seen fleeing into the cabin. Having no choice but to fend off the attackers, Cyrus draws his sword.

The introductory scene ends here and you assume control of Cyrus. Killing these enemies should be no problem because they have low health and deal little damage. This is a good opportunity to familiarize yourself with the combat controls. Press CTRL to swing your blade and hold ALT to block. Try moving around your opponents by holding the SHIFT key. For more combat techniques, see this page.

Once the pirates are dead, Brennan will emerge from the cabin and applaud you for your swift action.

Brennan: "Cyrus!"
Cyrus: "Captain, good to see you back in command."
Brennan: "Ah... please call me Brennan. You disposed of those ruffians so quickly I had no time to retrieve my sword from my cabin."
Cyrus: "That so, hm?"
Brennan: "Look! Over there!

"Let us move on, before more show up."

The ship arrives at the docks of Stros M'Kai. Before he leaves, Cyrus reviews the letter he received from S'rathra. It was written by Tobias, an old friend currently residing on the island at the Draggin Tale Inn. He suggests meeting him there to find out more about Iszara's disappearance. You are free to explore all of Stros M'Kai now, but to prepare yourself you should follow Tobias' advice and go to the inn. It is east-northeast of the docks. Along the way, you can talk to some people wandering around to learn more about current events and ask about Iszara and the Restless League.

If you want to save time and start the quest N'Gasta's Amulet, now is a good opportunity because Kotaro is right next to Brennan's ship. Another person with relevant dialogue is Siona, the woman near Kotaro. She will give you directions to the Draggin Tale. If you mention Tobias, more dialogue options are unlocked, mostly concerning background about the civil war between Crowns and Forebears.

When you arrive at the Draggin Tale Inn, Tobias will be pleased to see you. It is not necessary to listen to all dialogue, but at least ask about Iszara and the Restless League. While you're here, you may wish to speak with the barkeep, Dreekius, as well. After these conversations, you can fight the men in the tavern, all of them Forebears. Practicing your skills here doesn't alert the guards and your health is unaffected.

You have several paths now to progress the story. These include investigating the Statue of Hunding in the harbor, exploring the Goblin Caverns behind the waterfall, starting Kotaro's job, or delving into the Dwarven Ruins southwest of town. With your 53 gold, you can also buy some potions from the Mage's Guild or useful items from Gerrick's Goods. Refer to the map for directions.

The introduction is divided into four parts, which you can skip by pressing ESC (default).

In this initial scene, the camera moves throughout some sort of library. There are scrolls and books on the shelves and alchemy tools on the table in the middle. As the camera approaches the other side of the room, volumes of The Elder Scrolls Adventures are shown and the R volume is taken out. The pages are flipped to a map of West Tamriel, which begins the prologue.

The prologue explains recent history up to the present year, 2E 864, specifically the death of Thassad II, the ensuing civil war between Crowns and Forebears, and the Empire's occupation of Hammerfell.

Narrator: "It is late in the second era, a time of war as the Empire of Tiber Septim sweeps through the kingdoms of Tamriel in a glorious bid for conquest. Septim is opposed on all sides, but never more fiercely than by Hammerfell the ancestral home of the Redguards. The High King of Hammerfell, Thassad II resists the Imperial invasions even as he sees other kingdoms crumble until, at last, without warning and surprisingly devoid of court treachery, death takes its full measure. With its High King dead, Hammerfell is crippled plunging into a bloody civil war between the Crowns, fighting for their homeland's continued sovereignty, and the Forebears, who have finally accepted the Emperor's rule. The Crowns, led by the heir to Thassad, Prince A'Tor, are continually victorious, spilling the blood of the Forebears across Hammerfell's sands."

Narrator: "From his seat of power in the port city of Stros M'kai, Prince A'Tor slowly reunites his father's unraveled kingdom. Feeling their impending defeat, the Forebears sign a pact with the Emperor, allowing him to bring his armies in, crush the Crowns, and rule Hammerfell as his own. Tiber Septim's armies prove too much for the proud Redguard Crowns."

Narrator: "Tiber Septim sends his best commander, Lord Richton, to Stros M'Kai to close the grip on Prince A'tor and the Crowns. The prince rallies his forces for one last stand. Knowing that Hammerfell's sovereignty is at stake, the Crown forces match the might of the Empire meeting them in the harbor of Stros M'kai for the final battle. The fighting is fierce. Lord Richton, having seen the Prince's victories at sea before, decides to bring his last resource to the fore..."

Narrator: "...the Dragon, Nafalilargus, proud jewel of the Imperial crown. A'Tor commands his archers to ready their weapons... ...but is struck down himself by Richton's assassin, felled by an arrow whose poison spreads too fast. A'Tor's wizard attempts to save the Prince but the dragon ends his magic, and the Crown's hope for victory, in a single, fiery breath."

Narrator: "Having conquered the Crowns, the Emperor's forces claim rule over all of Hammerfell. Imperial garrisons are stationed at every city and Richton himself is named Provisional Governor of Stros M'Kai. Months pass. The Redguards of Hammerfell, both Crown and Forebear, learn to live under the new Imperial rule and Tiber Septim extends his reach into the rest of Tamriel. It is only through fate that any of this will come to concern our hero, Cyrus, a redguard who long ago left Hammerfell to wander the borderlands of the Empire." 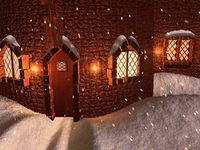 A tavern in Wayrest 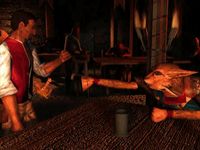 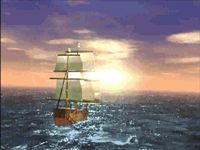 "Hammerfell's prodigal son, Cyrus, returns to the province of his birth." 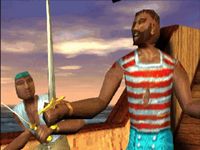 "The Restless League is claiming this cargo."

This scene happens after the prologue and before your encounter with the Restless League. It introduces Cyrus and explains why he is headed to Stros M'Kai. The part with S'rathra is set at a tavern in Wayrest on a snowy day. The view zooms in from outside to a window, then switches to inside. Note that all of S'rathra's dialogue is in the Ta'agra language, and the subtitles are translations.

S'rathra: "Smile, Cyrus. Here's the excuse you've been looking for."
Cyrus: "Let's make this short, S'rathra, I've got work to do."
S'rathra: "All you mercenaries are the same.

Cyrus: "I leave with Duadeen's men in an hour."
S'rathra: "Ruffians in the night, heavy with Imperial coin, after some poor farmer who owes the kingdom his wife."
Cyrus: "You should know. You got me the job."
S'rathra: "And he taketh away. For you.

S'rathra takes out a letter and hands it to Cyrus.

The scene moves forward in time, showing the ship Cyrus is taking to Stros M'Kai. It then shows Cyrus sitting on the deck.

Narrator: "Hammerfell's prodigal son, Cyrus, returns to the province of his birth.

"He buys passage to the island of Stros M'Kai, in the hopes of rescuing his sister."

Two Restless League pirates swim over to the ship and climb onto the deck. Brennan sneaks into his cabin while the pirates threaten Cyrus.

Pirate 1: "Get below is what the pirate said to the wet-earred knaves before him"
Pirate 2: "The Restless League is claiming this cargo."
Pirate 1: "Said the other with cruel, cruel clarity."
Cyrus: "Probably wouldn't make a difference if I told you I had no time for this."
Pirate 2: "This is about Redguard honor, boy, stand aside."
Pirate 1: "Yes, a doubtful notion it is, piracy and politics, but there you have it."
Cyrus: "Never been much for politics. In my day piracy was honest work."
Pirate 2: "Don't be a hero boy."
Cyrus: "Where's the money in that?"
Pirate 1: "And, yea, verily by his bravery they were impressed for a scant few seconds..."