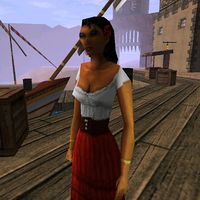 Siona is a Redguard working girl who wanders the docks of Stros M'Kai near the warehouses. She is one of the first characters you are likely to meet. If you tell her Tobias is the friend you are meeting at the Draggin Tale Inn, Siona will become your friend and provide more dialogue. Tobias refers you to her for advice if you talk to him first; he implies that she is one of the few Crowns left in Stros M'Kai.

After you escape the Catacombs, she will mention that Brennan wants to see you, but warns not to trust him. As your friend, Siona also reveals how she knows he plans to betray you. With this information, you can confront Brennan and avoid having to fight the two Imperial guards in his ship's hull.

She is one of four people who you may hear about the Smuggler's Den from, the others being Gerrick, Mariah, and Prnell.

"I bet you wave that thing for all the girls."

"May I trouble you for a moment, my lady?"
"Lady, you say? You must be new in town! Besides, Siona would have remembered you."
"Cyrus, at your service."

"How's business, my lady Siona?"
"Can't complain, but them Imperials just don't give the same satisfaction."

"Siona, my dear, you're looking lovelier than ever."
"Ah, Cyrus, you shouldn't tease a girl so."

"Hello again, my lady."
"Come give Siona a kiss, you sweet boy."

"Hello, Siona. Miss me?"
"Cyrus, don't be such a stranger! By the way, Captain Brennan is looking for you.

If you are friends:

"Find a wizard then!"

"Do you know a young lady named Iszara? My sister, last seen over three months ago."
"Iszara, yes, I see the family resemblance. Can't say I know her, though. She was all caught up in them troubles we had when the young prince was killed."

"What is news around Stros M'Kai these days?"
"That it's best to keep your mouth shut, or end up in the Catacombs. Or worse."

"Have you heard anything about a group called the Restless League?"
"They claim to fight the Empire, but they seem more interested in plunder, from what I can tell. They make a point to target Forebears, though, so I guess they aren't all bad."

(Disappears if you have talked to both Dreekius and Tobias)

"A friend is meeting me at the Draggin Tale. Do you know it?"
"Sure, Siona knows it all right. Used to be a favorite of mine till that damn lizard barkeep got all high an' mighty on me ... does this friend have a name?"

"Tobias. Do you know him?"
"Did Hunding hate goblins? Course I know him!
"One of my best customers, and I'm no lie. Any friend of Tobias is a friend of Siona. I'll be happy to help you out any way I can."

"I'd prefer to keep that to myself."
"Suit yourself, none-a Siona's business, right?"

(Unlocked by Tobias: "Crowns" if you are not yet friends)

"My friend Tobias told me to look you up."
"You know Tobias?
"One of my best customers, and I'm no lie. Any friend of Tobias is a friend of Siona. I'll be happy to help you out any way I can."

(Unlocked by "Iszara" if you become friends through "Draggin Tale")

"Maybe you can help me. Tell me more about the recent 'troubles' in Stros M'Kai."
"You know, the civil war between the Crowns and the Forebears. You really aren't from around here, are you?"

"Tell me more about the Crowns."
"They supported Prince A'tor after his father died. True Redguard patriots, more's the pity."

"What of these Forebears. Who are they?"
"Forebears! Pah! And they call me a whore! Sold out the Prince and left us with the streets full-a foreign soldiers and not an honest ring to any heel."

"Was my sister involved in the civil war in some way?"
"Well, I don't want to spread gossip, especially not to her brother, but they say she was friends with the Prince.
"Good friends, ya know? So it's no wonder she disappeared when Fatboy came to town."

(Unlocked by "Civil War" or "Catacombs" if not familiar with term; disappears once asked)

"The Prince -- what happened to him?"
"A'tor was murdered by the Imperials, that's what. Nice young man, too, not too proud to tip his hat to Siona, either. Ah, what a shame, what a shame."

"This lizard barkeep ... an Argonian?"
"Don't know his politics, but that Dreekius is a damn nuisance to us working girls.
"Pretentions [sic] of grandeur, he has. Nobody but Forebears in there now, anyway, and I wouldn't catch their get for any cart o' coin."

"You don't care for Dreekius, then?"
"Well, he's not a bad sort for a lizard, him and me just don't see eye-to-eye on the friendship of the thighs, so to speak.
"But he knows anyone who's anyone on this island, no mistake."

(Unlocked after quest Escape the Catacombs when you become friends)

"This Restless League -- how could I contact them?"
"Dangerous business that, but it's your skin ... There's shady dealings in Maiko's basement, the Smuggler's Den it's called. They could be connected to these League pirates."
"Thanks, Siona."

(Unlocked by "Fatboy" or "Civil War"/"Catacombs" if familiar with term)

"Tell me about this Richton."
"He's a bad one, he is, Siona can tell. Invited me up to the Palace once, but I won't be back.
"Maybe Siona is not a fine lady, but she is an honest working girl, and doesn't like being treated like dirt.
"And she definitely doesn't like being watched by that sneaking, prick-eared shadow."

(Unlocked by "Stros M'Kai" when you become friends)

"These catacombs -- some kind of a dungeon?"
"That's where Fatboy tosses any Crowns he can catch. Under the Palace -- where the dragon lives."

"Maiko? Who's that?"
"The local mapmaker. His shop is near the town square."

"Where is the Governor's Palace?"
"The poor dead prince's palace, you mean. Just keep climbing up the hill, you can't miss it. But don't expect to sneak your way in."

"Who is this shadow you speak of?"
"Fatboy's pet assassin, Dram. A ghoul from furthest Morrowind, they say.
"Those red eyes of his, watching me ... No, Siona won't be back to the Palace, not for all the coin in Hammerfell."

(Unlocked by "Catacombs"; disappears once Nafaalilargus is dead)

"A dragon lives in the Catacombs?"
"That's how Fatboy beat the Crowns. The Imperials, at least, think the dragon's still down there, layin' about on the royal sea o' coin."

(Unlocked after she warns you about Brennan; disappears once asked)

"Is there anything I should know about Brennan?"
"Listen, Cyrus, I happen to be friends with a couple of Fatboy's guards, and I heard them talking about paying Brennan to set a trap for 'that Redguard the Governor's so hot after'.
"Do be careful, won't you?"