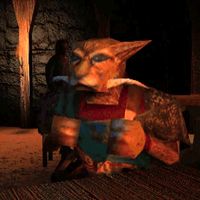 S'rathra is a Khajiit crime boss with connections to both Cyrus and Tobias, currently operating out of Wayrest. He received a letter from Tobias concerning Iszara's disappearance, which he passed on to Cyrus. At this time, he had gotten Cyrus a job working with a man named Duadeen, but canceled it due to the circumstances.

You don't actually meet him in the game, but he appears in the introduction and is mentioned a few times in your conversations with Tobias. He is only known to speak Ta'agra, though he can understand Cyrus and others perfectly well.

Today S'rathra is suave and urbane, a rich and powerful Khajiit in a world of Men-far from the young suthay-raht that used to run with the violent nomad cats of the Ne-Quin'al plains. After being lamed at the massacre of Stoop Low, he left Anaquina to keep from bringing shame to his tribe, eventually ending up in the far more cosmopolitan Pellitine to the south. For a time, S'rathra ran a lucrative skooma trade out of Senchal port, smuggling sugar into the Empire (becoming, unfortunately, an addict himself in the process). When Cyrodiil strengthened its presence in the Topal Bay, S'rathra left Elsweyr entirely.

He has made Wayrest his port of late, playing the lesser lords of High Rock to his benefit. Though the Empire has solidified the Bretons, there is still a lot of money to be made in the drawing of borders before the provincial laws dry completely. Mercenaries and fixers are in great demand there, and Cyrus and S'rathra have long shared a mutually beneficial relationship- the catman finds the paying parties and the Redguard does the dirty work.

S'rathra's latest assignment for Cyrus is cut short when the Redguard hears of his missing sister. The Khajiit, perhaps knowing all too well the loss of one's kin, provides the money and transport necessary for Cyrus to reach Stros M'kai.

Introduction
At a tavern in Wayrest, S'rathra hands Tobias' letter to Cyrus. He tells him not to worry about the job with Duadeen and that he can keep the retainer. Just before leaving to go find a ship, Cyrus reveals that he killed Iszara's husband ten years ago, a fact that surprises S'rathra.

This scene is notable for its extensive use of the Ta'agra language. A rough transcription was created by developer Douglas Goodall, posting as Jobasha. Note that it is phonetic and may not represent the actual Ta'agra words.[1]

From the above transcription, several words are known to be actual Ta'agra words or are similar enough and translated such that they are related to an existing word.