This page serves as an extension of the First Time Players page. It contains hints that can be used to get an advantage in Redguard, whether that be utilizing lesser known healing methods, quickly amassing a fortune of gold, locating buried treasure, finding special magic effects, or getting into inaccessible places.

Out of combat, other methods exist so that you can save on health potions.

You can find quite a bit of gold around the island. Most enemies can be looted and have a chance of carrying gold, and the various dungeons all have plenty lying around. Other notable locations include:

Items that you have to buy at some point include: 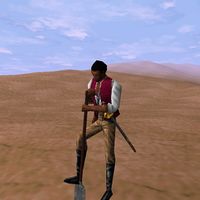 Digging with a shovel 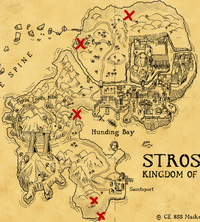 With a shovel you can dig anywhere on the island. There are five known locations where gold is buried, marked with a red X on the map to the right.

Each of these gives you 10 gold. Cyrus says one of the following lines when you successfully dig something up:

In either the alchemist's shack west of town or on the top level of N'Gasta's Tower you'll be able to pick up Orc's blood. Mix this with pig's sac in the Mage's Guild or N'Gasta's Tower to create the so-called Blood Lust potion. Drinking it gives a combined ironskin and strength effect that lasts for 6 minutes and 40 seconds.

Before heading into the Goblin Caverns, obtain the Talisman of Hunding for a special bonus while adventuring. The talisman opens a crack in the cavern walls to reveal a brazier. Holding your sword to the flame provides a superior strength effect.

See the Statue of Hunding page for a detailed walkthrough. 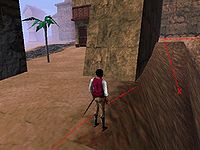 Jumping into the Old Quarter

Some extra gold and potions are available early on in the ground area of the Old Quarter, although the area is difficult to reach. It is normally inaccessible behind a gate, but on the far right end of the wall where it meets the cliff there is a way around. Run and jump over to where the cliff becomes more gradual, as shown in the image to the right, and follow the narrow ledge into the Old Quarter. The only way out is to jump into the sea.