Domesticating the savage Kagouti to serve as a mount is a recent endeavor, and to be frank, more than a little experimental. Do you have what it takes to stay in the saddle on one of these fierce, bipedal reptiles?

The Kagouti Mount was previously available from the Crown Store for 025002,500

. Its default name is "Touti Frouti".

Wheeled constructs and fabricants do just fine in most regions of the Clockwork City, but for traversing rough synthetic terrain, Seht's Apostles prefer the tough and capable Kagouti Fabricant mount. 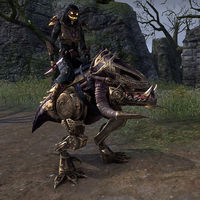 The Kagouti Fabricant is available from the Crown Store for 030003,000

In the valley of the Karth, the Reach clans have domesticated the fierce ice wolves, which they have bred for size and endurance to serve as mounts. A raiding party of Reach warriors riding Karthwolf Chargers is a fearsome sight indeed. 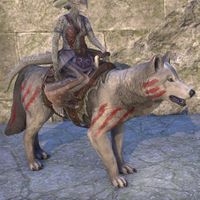 The Karthwolf Charger was previously available in the Crown Store for 022002,200

. Its default name is "Ice Loper".

Many masters of the art of necromancy find this horse suits their taste exceedingly well, especially since it possesses no fear of the undead that often surround necromancers. It calls to you, does it not?

The Khaj Necromancer's Steed is an upcoming mount. Its default name is "Bonecruncher".

Known as steeds of the Dremora, Kynbound Senche-Panthers have found their way into service as mounts for those who have some ties to the Dremora. Perhaps that's you? 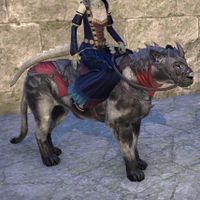 during the first week of the 2019 Witch's Festival. Its default name is "Foolslayer".