Though most ancient Dwemer automata are constructed primarily of the so-called Dwarven Metal, some rare and special animunculus mounts use a preponderance of Ebony. Creations like the Ebon Dwarven Horse are especially durable.

The Ebon Dwarven Horse is an upcoming mount. Its default name is "Metalmane".

Certain rare Dwarven Senche Vamidiums are constructed with key mechanical components forged, not of the usual Dwarven Metal, but of Ebony and Ebony-steel alloys. 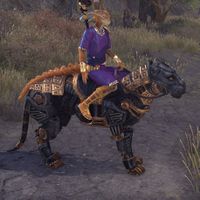 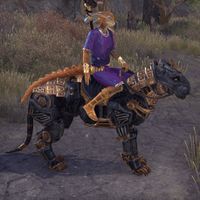 The Ebon Dwarven Senche Mount is a Dwarven Automaton-themed mount, or "vamidium". It is available as a Radiant Apex-level reward from Dwarven Crown Crates. Its default name is "Chrome Cat".

"There is no evidence that the Dwemer kept dogs, or pets of any other kind, for that matter, but like their neighbors the Nords they did seem to have some affection for the Wolves of northern Tamriel. One sees this in their mounts." —Thelwe Ghelein

The Ebon Dwarven Wolf is available via the Antiquities system. This mount is split into 17 fragments, found throughout the base game and Western Skyrim. You'll need to collect all seventeen pieces in order to form the mount. Its default name is "Blackwolf".

For the list of locations where you can acquire the leads to find these fragments, see the main page.

Though Dwarven Metal was usually employed in building Spider constructs, for reasons unknown some rare variants were built with a darker Ebon Steel alloy. When found in working order, these automata are prized by collectors. 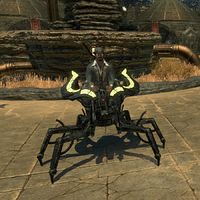 The Ebon Steel Dwarven Spider was available for a limited time in the Crown Store for 036003,600

, exclusively to ESO Plus subscribers. It can rise up on its hind legs and emit flashing red lights. Its default name is "Darkwalker".

Not only is this vamidium crafted from an Ebony and Ebon Steel alloy, but it also has the form of a Dwarven Spider, making it a must-have for those who prefer dark clothes and darker lives. 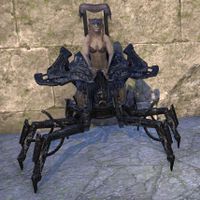 The Ebony Dwarven Spider is available as a Radiant-Apex reward in Baandari Pedlar Crates. Its default name is "Drearshade".

Is this ghostly Elk an antlered mount from the spirit world, or is it a sending from Lord Hircine's Oblivion plane of the Hunting Grounds? It seems solid enough, and doesn't disappear in broad daylight, so it must be more than just a haunt! 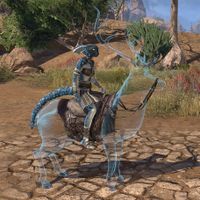 . Its default name is "Spook-Antlers".

The many multicolored eggs of Tamriel are valuable for their differing alchemical properties, and this makes the Egg Hunter's job a profitable one, especially in the spring. 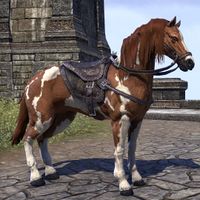 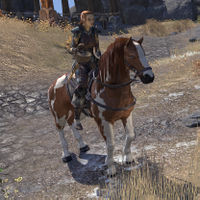 With rider carrying a basket

The Egg Hunter's Horse was available in the Crown Store for 0000??

. Players riding the Egg Hunter's Horse carry a festive egg basket while mounted. The Mara's Spring Chicken pet, which came as a daily reward during the month of April, pairs nicely with this mount. Its default name is "Dobbin".

With Dragons on the loose in Elsweyr, a modern cadre of Dragon Hunters have sprung up to hunt them down. Their mounts are sturdy and fearless. 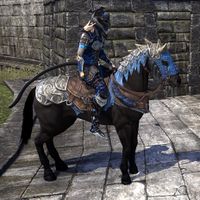 The Elder Dragon Hunter Horse was available from the Crown Store for 020002,000

"Seeking to meld fire with fungi, Ahzidal created the first Embermould Warhorse. Formed from char morels often used in stews, this mount can light a rider's way on the darkest winter nights."—Halund Greycloak 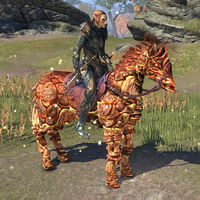 The Embermould Warhorse is available as a Radiant Apex-level reward in Gloomspore Crates. Its default name is "Vengeance".