Though Dwemer constructs are made mostly of so-called Dwarven Metal, some rare animunculi have parts forged from a super-hard whitish alloy known to blacksmiths as Dwarven Adamant. It's one of the rarest materials on Nirn. 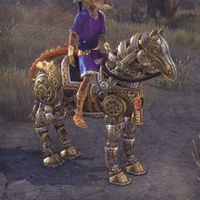 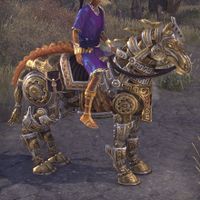 The Adamant Dwarven Horse is a Dwarven Automaton-themed mount, or "vamidium". It is available from the Crown Store via Dwarven Crown Crates as a Radiant Apex-level reward. Its default name is "Silverhoof".

There have long been unconfirmed reports of Dwarven Senche vamidiums with key parts made of the extremely rare and super-hard Dwarven Adamant metal. At long last, these reports have been substantiated.

The Adamant Dwarven Senche is an upcoming mount. Its default name is "Chrome Cat".

The shining metal known as Dwarven Adamant is an alloy melding ores of unknown origin into the most durable material ever made. Though found in parts of the ultra-rare Adamant Dwarven Wolf, the secret of its forging seems as lost as the Dwemer themselves.

The Adamant Dwarven Wolf is an upcoming mount. Its default name is "Gruffgears".

"Mirannah of Gwylim notes that the first Imperial bear calvary came into use in 2E 23. Scrawled next to this: '10th Legion steed?' and 'Leyawiin bear parade.' I can verify the date, but the latter two must be fiction notes."—Honorata Ancrus, Eyevea 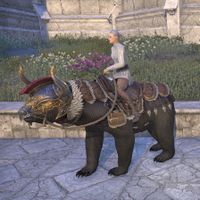 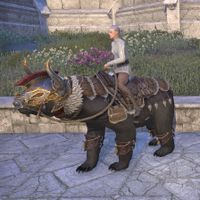 "The Potentate bought several herds of camels in 2E 25 for delivery to Versidue-Shaie, Mirannah of Gwylim states. 'Reman desert pursuit' and 'enchanted barding like bear' are also true. Chased by glowing camels—what a sight!"—Honorata Ancrus, Eyevea 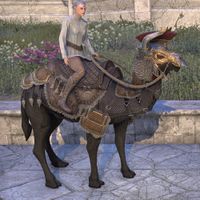 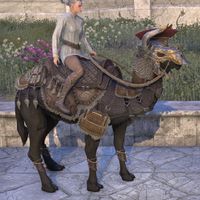 "Label your fact from fiction, Mirannah! 'The barding on Potentate horses shimmers due to a geas of loyalty Versidue-Shaie instilled in the materials.' No. It's simply magic. But 2E 5 for their first use? Feasible."—Honorata Ancrus, Eyevea 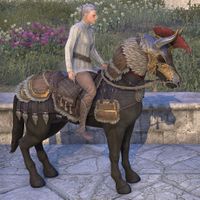 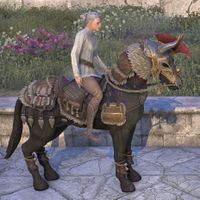 Available as an Apex-level reward in Akaviri Potentate Crates. Its default name is "Legion's Fancy".

"While I find the idea of 'Dark Elf assassins chasing Reman's loyalists in Morrowind on luminous Potentate guar steeds' to be laughably absurd, Mirannah's date of 2E 27 seems accurate for the first use of these ferocious mounts."—Honorata Ancrus, Eyevea 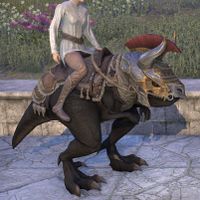 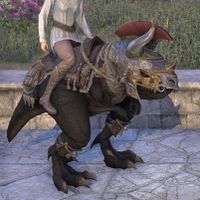 Available as an Apex-level reward in Akaviri Potentate Crates. Its default name is "Rootwallow". 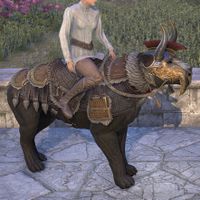 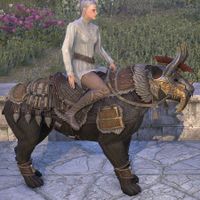 Available as an Apex-level reward in Akaviri Potentate Crates. Its default name is "Crooked Whisker".

"Placing the Potentate wolves in High Rock in 2E 4 seems off to me, but I find no texts disputing Mirannah of Gwylim's notes. 'Caused a panic in Shornhelm'—well, these wolves with their horned barding look menacing. Perhaps."—Honorata Ancrus, Eyevea 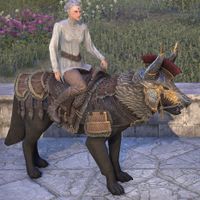 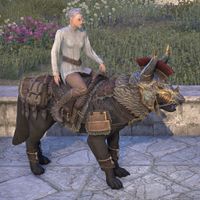 Available as an Apex-level reward in Akaviri Potentate Crates. Its default name is "Doomhowl".

Mounted knights are both powerful and prestigious, so it's no surprise the Three Alliances compete to breed the strongest and most majestic chargers for their armored cavalries.

The Alliance War Horse was previously available from the Crown Store for 025002,500

. It features the livery of the Aldmeri Dominion, Daggerfall Covenant, or Ebonheart Pact depending on the allegiance of the player character. When placed in a home, the appearance depends on the allegiance of any player looking at it, so the same horse can simultaneously appear different to multiple players. This mount's appearance is not affected by your character's riding skill. Its default name is "Destrier".

"The amber glow of this Gill Guar marks its origin as Gideon. Gideon Glowgill Guar is a mouthful, yeah? That's why it's an Ambergill instead. Watching a herd of these race out from Gideon? Impressive, just like their riders!"—Ukaspa of Lilmoth 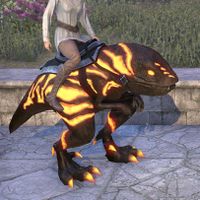 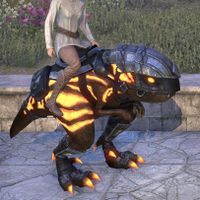 The Ambergill Guar is available as a Legendary-level reward in Akaviri Potentate Crates. Its default name is "Gnasher".

As the Dragon threat spreads, the need for veteran Dragon Hunters increases. These gold-barded horses can help you reach your prey quickly. 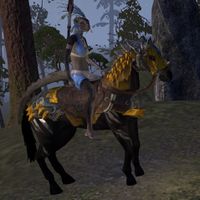 or as part of the Scalebreaker Collector's Bundle. Its default name is "Blazeheart".

When summoned, this warrior mount of the deathless Anka-Ra mystically amalgamates, drawing sand and strength from the distant Alik'r. 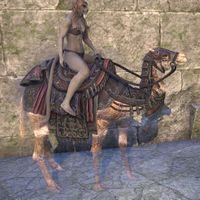 A combination of feline agility with the power of a sandstorm makes this mount both a favored and feared battle companion of the eternally loyal Anka-Ra warriors. 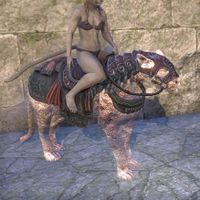 Ready to rule the arena? With the Arena Gladiator Horse as your steed, you'll do so in flashy style. Each one has received special training from former gladiatorial champions that makes it a practical and dashing choice. 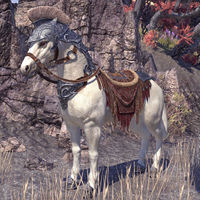 during Midyear Mayhem, between June 25 and July 7, 2020. Its default name is "Rumblehoof".

Sometimes, when necromancers reanimate a creature, they overdo it and imbue the undead entity with an excess of dark conjuration. In the case of the Ashen Courser, this residue of mystical power manifests as a cloud of grave dust and ash. 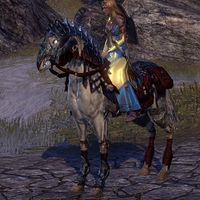 The Ashen Fang Lair Courser was available in the Crown Store for 0000??

These fiercely noble Snow Bears are said to have been brought from the legendary frozen continent of Atmora by mighty Ysgramor himself, who deemed them the only worthy avatars of the ancient Nord Bear totem. 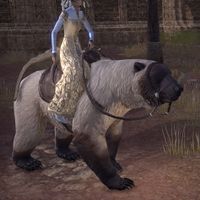 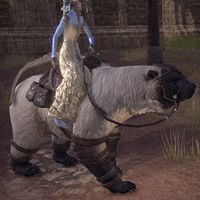 The Atmoran Snow Bear is a mount that is available from the Crown Store via Hollowjack Crown Crates as a Legendary-level reward. Its default name is "Tundra".

"Duskstalkers hunt and gather tormented battlefield ghosts, providing these lost souls a safe haven until they willingly leave. They can be seen as wisps, whose colorful auras emanate around both the sabre cat and its rider."—Clever Woman Moritra

The Auric Sabre Cat Duskstalker is available as a Radiant Apex-level reward in Sovngarde Crates. Its default name is "Mournwreath".

This wolf of light was born out of fierce devotion, and it tirelessly seeks a rider whose soul burns brightly for Meridia, the Lady of Infinite Energies. Will it be drawn to your inner light?

When one of Meridia's Auroran Knights manifests in Tamriel, and needs a mount, the knight has the ability to instantly summon a Daedric Warhorse from the Colored Rooms. Curiously, if the knight is banished to Oblivion, the mount sometimes stays behind. 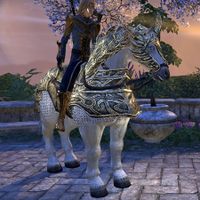 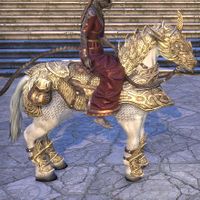 The Auroran Warhorse is available in the Crown Store for 030003,000

. It is wearing Auroran armor. Its default name is "Borealis".

Like their mistress, the Daedric Prince Meridia, Aurorans have magical control over color and hue, so when they need a mount in Tamriel after dark it's no surprise that they conjure Warhorses that are as dark as night itself. 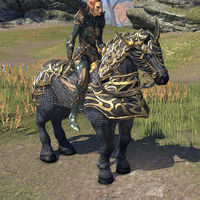 The Auroran Twilight Warhorse was sold in the Crown Store for 025002,500

from May 2, 2019 to May 9, 2019. It is now available as a Legendary-level reward in Gloomspore Crates. Its default name is "Shadowshade".

It's said that when Meridia's Aurorans need mounts in Tamriel they conjure these shining Warhorses out of pure light. Perhaps so, but they're certainly solid enough to support a heavily armed warrior at the charge! 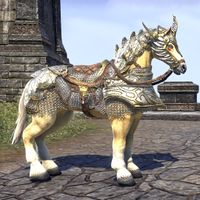 The Auroran Zenith Warhorse was available in the Crown Store exclusively to ESO Plus members for 025002,500

from March 7 to March 11, 2019. It is now available as a Legendary-level reward in Gloomspore Crates. Its default name is "Nimbus".

Though the Dragon Maarselok's blue-limned scourge illuminates this conjured steed, never fear! The magic that summoned it contains the blight, keeping the Green safe—but given its penchant for biting, tip the stablemaster extra for its keep.

The Azure Blight Wild Hunt Steed is an upcoming mount. Its default name is "Scourgekeeper".