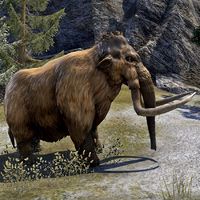 Mammoths are large creatures usually found herded by Giants. They are most commonly found in the Rift and Eastmarch, though they can be found in Wrothgar, northern Cyrodiil, and the western regions of Valenwood.

When killed, they may drop a lead for the Rune-Carved Mammoth Skull furnishing.

As they are considered elite enemies, mammoths are immune to all forms of crowd control effects.

The mammoth rarely provides you with Huge Mammoth's Tooth, a trophy required for the following achievement:

This Online-related article is a stub. You can help by expanding it.
Retrieved from "https://en.uesp.net/w/index.php?title=Online:Mammoth&oldid=2164671"
Categories:
Hidden categories: