The UESPWiki – Your source for The Elder Scrolls since 1995
< Online: Places: The Rift / Landmarks / Public Dungeons
Jump to: navigation, search

Deep in the Jerall Mountains, the remote canyon known as Steelhead Cleft sports some new residents—who've given it a new name.

The Lion's Den is an isolated valley in the far west of the Rift. 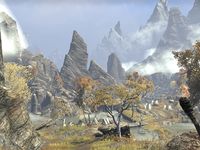 There are seven champions in the Lion's Den. Themod is the first of them and is east of the water and on the east side of the rocks. The Den Mother is to the northeast of Themod. Derone is in the east in a major encampment. Lort is just to the southeast of Derone. A frost troll named Inulu is to the far northeast in a mountain cave accessed by the lone path leading east and then north. Sebastien is quite a bit south of Lort, and Stenric just southeast of Sebastien. The group challenge is in a separate cave which has a couple of entrances.

This Online-related article is a stub. You can help by expanding it.
Retrieved from "https://en.uesp.net/w/index.php?title=Online:The_Lion%27s_Den_(place)&oldid=2088635"
Categories:
Hidden categories: