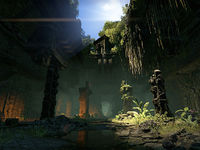 Vakka-Bok Xanmeer is a xanmeer located within Root-Whisper Village. Currently in ruins and only inhabited by voriplasm and miregaunts, the xanmeer hides a mysterious portal gate which leads to an entire Ayleid complex. In the past, it was the sister temple to the nearby Xul-Thuxis which was dedicated to Sithis.

Deep beneath the xanmeer lies Deep-Root, a mysterious cavern where the Remnant of Argon was created and has been stored until now. Deep-Root is accessible only through the Grand Nexus Gate which is activated by several empowered vakka stones. 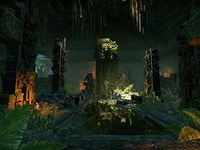 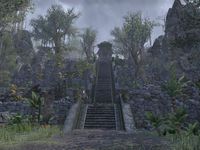 After entering the Xanmeer through the village entrance, you will find that many of the passages are blocked by debris and the rest is overrun by plant life. However some of the defenses are still active, such as the Miregaunts patrolling the maze chamber. On the eastern side of the Xanmeer, a wall has crumbled away to reveal a passage down to a natural cavern. At the end of one of the blocked passages, a copy of In Accord With Those Sun-Blessed can be found. 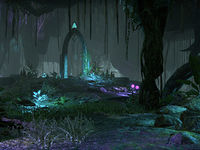 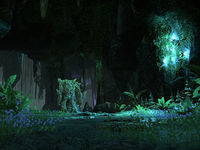 Guardian of the Blue Stone

The passage down to this cavern is lined with purple phosphorescent plants which grow throughout it, as well as a magically powerful variety of Aloe. However, the cave is infested with voriplasms and their Voriplasmic Corpse puppets which inhabit the cavern's underground pools and stream. In the center of the cave is a plateau which is dominated by a massive Ayleid gateway portal, called a Nexus Gate which is powered by a Welkynd stone. Said stone was taken by a powerful Miregaunt. 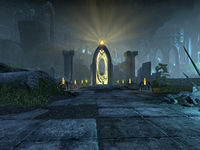 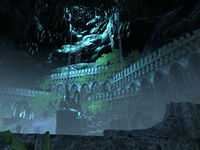 Accessible through the Welkynd portal gate, this already large cavern was further expanded by the occupation of the Barsaebic Ayleids over several centuries. At the end of a vakka-stone sconce lined pathway, lies a Grand Nexus Gate which is can be powered by a Vakka-Stone. This gateway is particularly special as it leads directly to the Deep-Root and the resting-place of the Remnant of Argon.

A smaller Nexus Gateway is located at the end the northwestern passage leads to the gateway nexus and by default, the rest of the Ayleid complex.

After the completion of The Remnant of Argon, the following creatures will appear in the area. 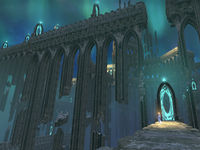 The walkways and gates of the Golden Path

The Golden Path, also called the Nexus, is a sub-realm of walkways and gates suspended in the air, powered by Welkynd Stones. This feat of magical engineering is the work of a group of Barsaebic Ayleids who traveled south to Murkmire to obtain souls and secrets from the Argonians and Hist, only to become enamored with the power of the Remnant and so they focused their efforts on finding it. The gateways mostly lead to various chambers within the Ayleid complex, including one which holds a precious Vakka-Stone. 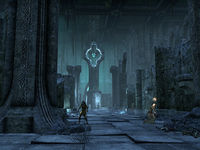 Ayleid undead shamble in the halls

The greater Ayleid complex is a series of chambers which are connected by Nexus Gates, though doubtlessly there are many other rooms which are currently accessible. As mentioned, this place was built over the centuries by the Ayleids and acted as their base of operations for their incursions into Murkmire, hunting down the secrets of the Remnant. In their time here, they learnt of the magic of the Vakka-Stones and incorporated it into their own magic. At some unknown point, the Ayleid population collapsed and the living abandoned the complex. However, many of the Ayleids became Undead and can be found shambling around in the ruins. As you progress through the ruins, you may find the fresher corpses of unlucky Blackguards.

In the Library chamber, you can find the Doomed Explorer's Journal near a gateway. 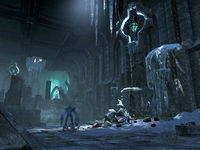 This chamber was kept cold by magic and the effect perpetuated by the inclusion of Frost Atronachs. The main purpose of this room was for the torture and interrogation of captured Argonians, as they were reptilian in shape it was thought their weaknesses would be the same. 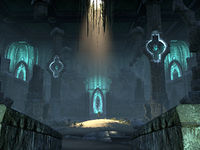 The leader of the Ayleid group—Myndhal, foresaw that he would not have enough time in one life span to uncover the secrets of the Remnant. And so took steps that he would become one of the undead upon his death. Nowadays Myndhal can be found in this room, jealously guarding the Vakka-Stone which he sees as his key to success. The chamber itself is large and rectangular, with inaccessible gateways on the upper levels and a skylight in the center of the ceiling. 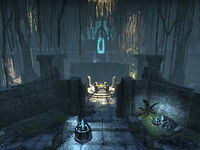 The Vakka-Stone in the center

This room, is quite similar to any Ayleid room which contains an Ayleid Well, except for one key difference. This "well" contains a very large Vakka-Stone specimen which can be used to power the portal to the Deep-Root. Conveniently, the portal on the opposite end of the room leads back to the Vakka-Stone Gateway

This area is a square shaped room with two offshoots and is filled with urns and trunks. It is reached through an out of the way gateway in the Frost Chamber. The other exit can be found on the western side of the room which leads back into the Nexus. However, there is nothing to be found there as it only leads to a bridge which abruptly cuts off.