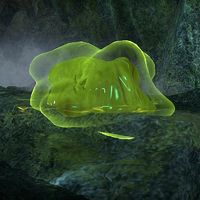 Voriplasms are mobile green slimes which attempt to devour anything that crosses their path. Each smaller voriplasm is part of a greater whole and thus can be considered to be part of the same creature.

They can be found deep in the Black Marsh as well as closer to the coast, such as in Murkmire. A sample from the Black Swamp made its' way to Orcrest which escaped during the Knahaten Flu, and the Voriplasms gained a foothold in Northern Elsweyr.

Coagulants are a similar type of enemy made from blood rather than green slime.

Colonist Conservation
The voriplasm will spread out and attempt to grab a target, if successful it will hold the target in place as it slowly consumes them. Breaking Free will allow the target to escape.
Colonizing Quills
Colonizing Spikes
Close range physical attack. Spikes form out of the mass and jab at the target.
Colonizing Toss
The voriplasm will leap away from their target and spit a green lump which grows into a smaller voriplasm, as well as causing AoE damage where it lands.

This Online-related article is a stub. You can help by expanding it.
Retrieved from "https://en.uesp.net/w/index.php?title=Online:Voriplasm&oldid=2168679"
Categories:
Hidden categories: