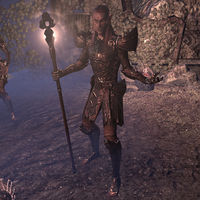 Myndhal is an Ayleid mage who can be encountered several times in the Mists during the dream-wallow. He was the leader of an expedition of Barsaebic Ayleids who came south to Murkmire looking for souls to enslave and the power of the Hist.

During Myndhal's campaign against the Root-Whisper Tribe he witnessed the power of the Remnant of Argon, and tried to capture it but never succeeded. Following this, Myndhal became obsessed with finding it. Over the centuries, countless Argonians were captured and tortured as he searched for its secrets and location.

Myndhal's undead version can later be encountered in the chambers linked to the Nexus, while searching for a Vakka Stone.

He is first encountered during the Hunting Party memory, where he kills the teacher of Mateem, before leading his force of troops to capture the other Argonians. 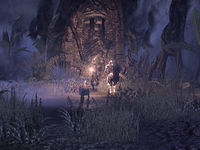 Kloxu: "Uraz! He's—"
"Outsider! Did you do this?"
<Myndhal grabs him with his magic.>
Myndhal: "Ah, another soul for our harvest? Delightful."
<Kloxu's soul is ripped out of his body. As this happens, more Ayleids appear out of the mist.>
Myndhal: "Soldiers! More of these lizards lurk in the swamp nearby, no doubt. Take them. Alive."
<You begin to leave the vision.>
Myndhal: "After all, we'll need guides to their village."

The second time he is encountered, is in the ruined Root-Whisper Village where he leads the second wave of Ayleid soldiers to attack the Argonian survivors, forcing them to retreat to the Hist tree. 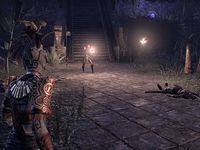 Raj-Kaal Druxith: "This is everyone? All you could find?"
Raj-Kaal Druxith: "It will have to do. The sap-speaker calls for aid. The four of you must—"
<A scout runs up to him.>
Scout: "They are coming! They are coming!"
Scout: "The Elves! More come, raj-kaal. Hundreds more!"
Rak-Kaal Druxith: "How? We slaughtered them here like hog-fish."
Scout: "That was only the first wave."
Rak-Kaal Druxith: "Kaoc. Fine! Fall back to the Hist. We fight and die in its shadow. Bare your fangs, root-kin!"
<Myndhal appears.>
Myndhal: "Yes, by all means—bare your fangs! I wouldn't want this to be too easy."
<Scout rushes at Myndhal and the ayleid kill him easily.>
Myndhal: "Have you forgotten the laws of the hunt so soon? Prey is supposed to run."

The Chamber of the Remnant of Argon Vision[edit]

In the third vision of the dream-wallow, you will find yourself defending the ritual using the Remnant of Argon from the Ayleid attackers. As the shields fall, Myndhal himself will eventually take to the field.

Sap-Speaker Kuzei: "Their leader approaches. Keep him away! The ritual is nearly complete!"
<Myndhal runs into the chamber.>
Myndhal: "Enough! I will pry your secrets free personally!"

When he is defeated, Myndhal will ominously say "You haven't stopped me …." before dying.

Are his abilities during this fight the same as in his undead form?

While hunting down Kassandra you will eventually find yourself in the ruins of the invading Ayleids and the subrealm of gateways known as the Nexus. Within these chambers you can witness old conversations between Myndhal and Houtern, to learn the reasons why the Barsaebic Ayleids started attacking the Argonians.

When you first enter the Nexus, you can see the two of them looking out over the walkway.

Myndhal: "After all this time, this is all we could manage … a lifeless vault of gateways, availing us nothing!"
Houtern: "My lord, we have carved a golden path to the very frontiers of magical praxis. This nexus is austere, yes, but—."
Myndhal: "You mean to convince me to abandon my search, don't you? The power of the Hist—the power of the Remnant—dwarfs your golden path! I will claim the tree's power, no matter the cost." 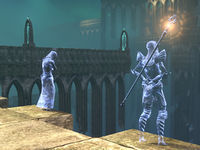 In front of an active Gateway, Myndhal will be annoyed that the Argonians' souls have somehow slipped his grasp.

Myndhal: "Souls do not just vanish, Houtern! Find them, or I will find someone else who can."
Houtern: "My lord, the Hist's magicks are unlike any we've encountered before. The souls are pulled to a focus of some kind. Without finding the source …."
Myndhal: "The Remnant … it always comes back to the Remnant. Continue your research. I have much to consider."

On another walkway, Myndhal considers they haven't been using the right kind of crystal for their gates to reach the Hist.

Houtern: "My lord? You wished to show me something?"
Myndhal: "Cast your eyes across this vast expanse. Tell me, what do you see?"
Houtern: "Gates, my lord. A realm of doors and passages."
Myndhal: "Yes. A sea of azure gates—none of which lead to the Hist. Perhaps we use the wrong kind of passage. Find one of these beasts' sun-crystals. We have work to do."

In the magically cold chamber, the pair consider the corpse of an Argonian. Myndhal is annoyed that they haven't been able to get any answers out of them.

Myndhal: "If the cold doesn't do it, try something else. They're lizards. They can't possibly just adapt to everything."
Houtern: "That's the thing. I don't think they are just lizards. I don't know what they are. Their physiology is …I don't know how they are even alive."
Myndhal: "Keep trying. There must be some way to break them."
Myndhal: "They'll tell me their secrets one way or another."

The final conversation you will witness is them walking down a Nexus walkway and Houtern mentioning they have found the right sort of crystal.

Houtern: "We found a suitable stone, my lord. The arcane properties are unlike any I've seen before."
Myndhal: "Yes. We should have been researching them from the beginning. The light of Magnus given form. Remarkable."
Houtern: "Integrating this new stone into our existing gates … The process will take time."
Myndhal: "Time no longer matters to me, Houtern. I've made preparations. Even if it takes an eternity, I will discover the Remnant's secrets." 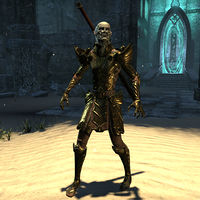 Once you have transversed the Ayleid chambers and gateways, you re-encounter Myndhal in the chamber preceding the one containing the charged Vakka-Stone. As he hinted in his previous conversation, he transformed himself into one of the undead.

When he sees you he will immediately attack.

Myndhal: "Interlopers! You will not disrupt my plans. Not at this final hour!"

He fights with his vakka-stone charged staff.[verification needed — Attacks seem similar to Kassandra's]